The unique Michiko & Hatchin comes to a surprising yet satisfactory conclusion here with the second collection. The two are still on the run from the police, hurtling towards their collective pasts, and meeting all sorts of characters along the way. 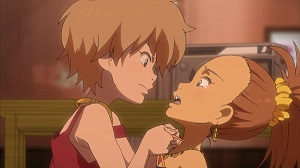 As an ‘on the road’ TV series, Michiko & Hatchin really excels. Some of the best moments concern people they meet along the way. Such single episode stories pepper the series sporadically and are incredibly effective, even though writer Takashi Ujita only has 22 minutes to fit in a beginning, middle and end. I have become accustomed to the sometimes jarring storytelling in this series. It’s clear that a lot of stuff happens between episodes, which can be confusing when wondering how a particular cliff hanger was resolved in the viewer’s absence. It frustrated me with Collection 1, but I managed to look past it with number 2.

The two lead characters remain as strong, resourceful and enigmatic as ever. Still searching for Hatchin’s father/Michiko’s ex-boyfriend Hiroshi (Kanji Tsuda), one gets the sneaky suspicion that this guy isn’t worth all the fuss, but the show handles the impending conclusion with aplomb.

If you thought the first half of the series had a propensity to get a little dark, then you should be warned that part 2 gets positively stygian. On several occasions, I was shocked by the audacity of the show and the intelligent cruelty of some of the characters, who wouldn’t look out of place in your average Tarantino movie. This is a show that’s definitely for mature audiences.

The cop on Michiko’s trail, Atsuko Jackson (Maki Sakai) gets her own episode here, and it’s great to get to know her better. Her role in the overall narrative, however, isn’t really resolved in a satisfactory manner. Her feelings towards the convict flip flop so often that it’s hard to keep up. This is a pity, because she started out so strongly in the first few episodes.

The animation is still top notch. It mightn’t be as conventionally slick as, say, Guilty Crown, but the exaggerated character designs work really well, and are a good counterbalance to the narrative, which has the propensity to go from darkly comic to simply dark at a moment’s notice. The picture quality is stunning, whilst the often sparse soundtrack stops the audio from getting too chaotic.

Michiko & Hatchin is an excellent example of an anime doing something a little different. Those who find the usual tropes tiresome ought to check this show out, because it really does do a lot of things right.

Michiko & Hatchin Collection 2 is available now on Blu-ray and DVD from Madman.

←Tracks All is Lost→