Hip, sultry criminal, Michiko (Yōko Maki) has just broken out of a high security prison when she bursts into nine year old Hatchin’s (Suzuka Ohgo) life. The young girl has been living with a foster family since birth, a horrid bunch of people who abuse her at every moment they get, effectively putting her in the role of Cinderella. When Michiko turns up, saying she’s honouring the memory of Hatchin’s father – and Michiko’s ex-boyfriend (Kanji Tsuda) – they set off on a road trip with a gaggle of cops and gangsters on their tail. 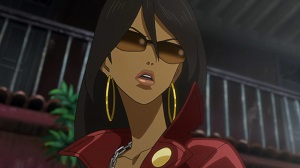 This series is from the makers of ‘Cowboy Bebop’, and boy does it show. The opening titles alone feel like a beachside, Latin American version of that legendary show’s credit sequence, but the piecemeal approach the narrative is also similar. Michiko & Hatchin feels a bit like the writers were making it up as they go along. There seem to be story gaps between the episodes, and a regular willingness to leave some questions unanswered in favour of focussing on a tightly-written, once-off short story. Then, bang, they’re focussing on the meta-narrative once more, with supporting characters playing catch-up, explaining where they’ve been all this time.

This lopsided serialised storytelling can be a bit frustrating at times, but when the show gets it right, it really impresses. Michiko is a fantastic character. She’s hot – all legs and boobs – but the show never gets too fan service-y. Characters in her vicinity may get distracted by her looks but the narrative never does. She herself expresses a casual disinterest in most of the people around her, aside from the young Hatchin. The latter is an interesting creation too. Rather than simply a wide-eyed innocent, Hatchin is smart and headstrong. She sees the people in the world around her – the homeless kids and the women forced into prostitution – and is determined to succeed where they have failed. Occasionally judgmental, she’s not at all perfect, and this is to the show’s credit.

The animation is beautiful, and the character models quite distinctive. The colour palette is great and the show never falls victim to the kind of visual cues that are common in many other anime TV series. 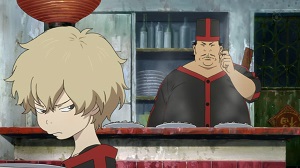 The Blu-ray presentation is perfect, and the subtitles easy to read. Occasionally they subtitle simultaneous background chatter, such as news reports or nearby conversations, and it can be difficult to read both sets of dialogue at the same time. The music, provided by Brazilian Alexandre Kassin, is exceptional.

The special features included aren’t that special. They include an interview with the English language voice actor for Michiko and a press conference filmed during the initial release in Japan. In relation to the English dub, I had a brief listen and it definitely paled in comparison to the original Japanese voice acting. I know I always go on about this, but I really feel that the original audio is the way to go with anime.

Wildly inconsistent, Michiko and Hatchin is nonetheless a great show with flashes of brilliances. Intermittently hard to follow, it may frustrate some viewers who want a more formulaic story, and I’d be lying if I said I never got annoyed with the confusing narrative jumps. But the show is an excellent example of an anime series that eschews the traditional tropes. It also regularly passes the Bechdel test, which is surprising. (Whilst I have concerns about the validity of that test itself, it’s refreshing to see a show that isn’t afraid to have females dominating both the screen and the narrative.) I’m excited to see what the second half of the season will bring.

Michiko & Hatchin Collection 1 is available now on Blu-ray and DVD from Madman.

←Paranormal Activity: The Marked Ones 47 Ronin→