Perhaps it takes one to know one? In spite of the faint praise with which it has generally been greeted, The Weather Man struck me as an insightful exploration of dissatisfaction despite the relative comfort of our modern existence. 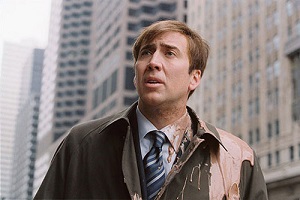 The most obvious point here is that workplace success and financial security do not guarantee happiness – it takes self-acceptance and self-awareness, without which no amount of money will bring satisfaction – and it is well made. Alongside that, we are taken on a tour through a man’s inability to relate to others effectively, his desire to be approved of by his overtly successful, (but somewhat cold), father, his attempts to improve his relationship with his own children, and the fantasy of what he expected his life would hold compared with the reality with which he is left. The Weather Man contains an incredible amount of character detail, and David Spritz’s angst is beautifully captured. The man gets covered in fast food throughout the film, but carries himself with quiet dignity and resolve, and thankfully he is eventually allowed some resolution.

At the heart of this, Nicholas Cage continues to cement his reputation as a character actor of significance, with a performance of depth and subtlety. Cage is eminently suited to the ‘hangdog’ demeanour of Spritz, and yet is required to demonstrate frustration and anger through to love for his children and his father, and he delivers all of this with skill. He has come a long way from films like 8mm and Gone in Sixty Seconds, and in spite of such fare as National Treasure, he has featured in several quality films in recent years. Opposite him are Hope Davis, who again shines in a supporting role, (a position she seems unlikely to ever leave behind for a lead, in spite of her ability), and Michael Caine who never really seems to have his heart in this. His American accent is strangely inadequate, and his is the only major performance that lets the film down. Nicholas Hoult transfers from British film (About a Boy) to US production in another encouraging turn, and Gemmenne de la Peña is also more than adequate.

The Weather Man contains several uncomfortable sequences, but balances those with some sly wit and laughs. In addition, there are a few images that will stick with me for some time – the moment of Spritz’s choice, bow and arrow in hand, is brilliant, and the subsequent footage of his streetwalking with bow and quiver is iconic (and worthy of the poster above). Sure, some of this material harks back to Falling Down, the 1993 drama that shares similar themes of emasculation and dissatisfaction, and yet it feels fresh in the hands of Gore Verbinski and Cage.

The Weather Man is not an easy 101 minutes, much of the time being spent with a depressed man in full focus, but is rewarding nonetheless. If you’ve ever looked around and wondered ‘is this it?’, The Weather Man may have something for you.

←V for Vendetta Inside Man→