The ubiquitous Clive Owen (Derailed) turns up in Spike Lee’s new joint, Inside Man, a heist movie that manages to squeeze the last little drops of inventiveness out of a tired genre. 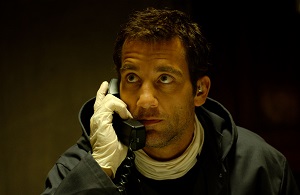 He’s joined by an impressive array of stars, as Lee is apparently one of those directors that actors flock to join, or simply has the respect and movie-making clout to round them up. (Am I referring to actors as sheep? Of course not! I would never be so base! I’m simply referring to directors as shepherds…) Denzel Washington (Man on Fire) is really the star of this film, with first billing and the most screentime, however it isn’t surprising that I thought of Owen first. Owen’s face is the most prominent on the poster, and as the leader of the bank robbers his role is the most significant. Chameleon Chiwetel Ejiofor (Serenity) puts in a surprisingly subtle performance as Denzel’s offsider, which proves yet again that he’s an incredibly versatile actor, and one to watch. I’m looking forward to the day in which he gets to play the lead. Christopher Plummer is one of those veteran actors that seem to have no end of roles available (a bit like John Hurt), and Jodie Foster plays the wild card – a powerful woman whose motives are wonderfully obscure. Thankfully this is a long way away from the caring yet tough as nails mother she played in Panic Room and then duplicated in Flightplan. Willem Dafoe also appears in a strangely insignificant role.

This wonderfully varied cast come together in a film that initially had me worried – was I really up for another bank robbery? Hadn’t it all be done? I was soon thoroughly engrossed in the feature, however, as Inside Man keeps you guessing right until the end. Though written by Russell Gewirtz, it is still Lee’s joint from beginning to end, and it wouldn’t be a Spike Lee film without at least a casual reference to racial tension. In someone else’s hands, dabbling in a bit of post September 11 prejudice might have come off as awkward, but a great script and Lee’s confident direction mean that such moments are the most effective in the film. This film has a similar visual style to Summer Of Sam, rather than the almost comic book colouring of Lee’s earlier films like Do The Right Thing or Mo’ Better Blues.

Whilst thoroughly engrossing, Inside Man somehow isn’t perfect. The lack of background given for Owen’s character (or indeed any of the culprits) makes his character bland rather than enigmatic, even if his performance is strong. More significantly, as soon as I’d walked out of the theatre I couldn’t remember what had been so great about the film, nor did I feel I would ever watch it again. An entertaining use of two hours, but once the credits have rolled the film is definitely over – it doesn’t leave one with much to talk about.

←The Weather Man Grave of the Fireflies→