Though Alan Moore has (typically) distanced himself from the project (it now says ‘based on the graphic novel illustrated by David Lloyd’ for goodness sake), I’m pleased to announce that V for Vendetta is easily the best-adapted of his work, and an awe-inspiring and challenging piece of filmmaking. Previous adaptations have had varying success – From Hell was fine but NOTHING compared to the comic, which in my opinion was the eighth wonder of the world; The League of Extraordinary Gentlemen was entertaining but downright offensive to some, and Constantine was great except for the fact they cast Keanu Reeves as the redhead Englishman. 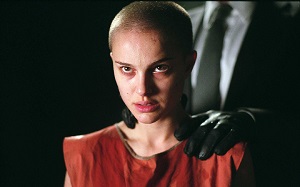 That Alan Moore has taken offence at Hollywood in general is no surprise, and the fact is he’s a genius at his job, but has no wish whatsoever to aid in the adaptations like, say, Frank Miller with Sin City. But I for one think the Wachowskis and James McTeigue have done a brilliant job with V for Vendetta. They’ve taken the original Thatcherite dystopian vision and linked the narrative with (very) current events, as well as managing to hold off from making a special effects-heavy movie which would have ruined the narrative completely. They have made some changes – the evil government’s actions are a little more blatant here, and our masked hero’s actions a little less extreme, but considering that this was a big studio film, it’s astounding. We’ve had some extremely political films in the mainstream cinematic arena recently (Star Wars: Episode III, Batman Begins), but this is easily the most deliberately barefaced attack on current events that I think I’ve seen in the last ten years or so. Whilst the film is a little less subtle than the source material, and misses out on some of Moore’s most intelligent insights (like V’s definition of anarchy as opposed to chaos), V for Vendetta is challenging beyond my wildest dreams.

Natalie Portman is of course fantastic as Evey, but it is Hugo Weaving who steals the film from behind his mask. He captures precisely the V I imagined from reading the comic – equal parts playful, ruthless, moral and fanatical. Most importantly our masked hero never falls into the ‘Power Rangers’ trap that the Green Goblin did in Spider-Man, instead keeping the eerily grinning façade realistically stable throughout his soliloquies. John Hurt and Stephen Fry join proceedings, helping to keep it thankfully English, despite the fact that the main two actors aren’t, and Stephen Rea has possibly the least enticing task of playing Detective Finch, whose role suffered from the some significant abridgments in the adaptation process.

The film does have a couple of weak points: there are a couple of scenes that almost drag, and could have easily been deep-sixed; and Fry’s character Deitrich doesn’t quite ring true, feeling a bit of a mismatch alongside the film.

V for Vendetta makes very few compromises, and this is a hero we rarely see in comic book movies – he does what he believes is right, not what is good. That distinction is paramount to the narrative, as we witness acts of terrorism and murder in the name of freedom. Thus we are left with conflicting notions of right and wrong, good and evil, and I’m sure this is a movie that will have debate raging for some time.

James McTeigue and The Wachowski Brothers’ screen adaptation of the Moore/Lloyd view of a totalitarian London of the future is obviously inspired as much by current events as it is by those of the Thatcher era in which it was originally written. The recent worldwide focus on terrorism, and, what border on, attacks on civil liberties the terrorist acts have prompted, resonate throughout this powerful film, however the almost self-conscious focus on making a statement prevent it from being either as powerful or as enjoyable as it could have been.

Certainly, The Wachowski Brothers have made their point. Their film brings into sharp relief the events of recent times – incarceration without legal recourse, the abuse of political prisoners by their captors, the use of the media to bring fear to the masses (both by terrorists and their targets) – it’s all neatly and effectively retold here.

The intriguing aspect, however, is how audiences will react to being in the position of cheering for a terrorist whose actions are clearly intended to provoke anarchy and the subsequent downfall of the government of the day. V for Vendetta seems to revel in the idea its hero is what we daily revile, perhaps aiming to make us question our refusal in the West to acknowledge any understanding of the motives of those that threaten us.

In Hugo Weaving, The Wachowski’s have turned their reliable Agent Smith of The Matrix Trilogy into a masked man of charm and wit. Weaving is wonderful; in a role that never once allows us to see his face, he must convey all through inflection of voice and subtle body language, and he brings a depth to V that McTeigue must only have dreamed of. V has shades that were required to allow any of the writers’ intentions to succeed – were he an unsympathetic zealot the audience could not have tolerated his actions – and without Weaving, V for Vendetta could not have worked. Alongside Weaving, Natalie Portman again shows her under-appreciated talent, suggesting she may well leave her role in the abysmal Star Wars prequels behind her and achieve ongoing success – in films like Vendetta, Closer and Garden State, she has played a variety of characters and seems always to want to stretch her abilities.

The problems lie mainly in the sledgehammer technique sometimes employed in conveying the underlying messages. V often baldly verbalises, (in a florid language that can make following his train of thought an exertion rather than an aural pleasure), the point being conveyed, not trusting the audience to understand for themselves. Surely, in a film aiming to communicate as well as entertain, we can be given more credit than this? Additionally, there are some slow moving sequences; by slow-moving I’m not referring to ‘bullet time’, although there are occasional moments where it seems the writer/director trio couldn’t resist. Some expository scenes are a little ponderous, however, and the eventual running time of 132 minutes is overlong, and diminishes some of the potential impact.

In spite of several flaws, V for Vendetta is an ambitious film that almost succeeds, and is moderately entertaining as well as politically incisive. Whether you agree with The Wachowski’s world view may well determine your experience of the film – it dresses itself so defiantly in its commentary, if you can’t accept determined questioning of the directions we in the West seem to be choosing, it is unlikely you’ll find anything to enjoy in Vendetta.

←Cry_Wolf How Much Do You Love Me?→