Session 9 comes across as a mix of The House On Haunted Hill and Identity. I was bound to be attracted to this straight to rental low(er) budget thriller. 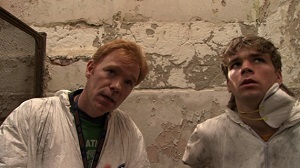 And thrill it certainly does. There are a couple of moments of genuine spookiness, and some great camerawork that inspires terror. The good ol’ ‘person a long way away from the camera’ works here – something I’ve liked ever since seeing Romero’s Night Of The Living Dead. It’s good to see films that don’t simply rely on things jumping out at the camera for their scares.

The performances are all great here, and it’s good to see because none of the actors are truly ‘big’ names. It’s also good that they all get a chance to shine – we’re not simply following one or two people, but the whole bunch.

Unfortunately the film gets a little too predictable around three quarters of the way through, but then picks up again for the finish. There’s not much else to say. This film doesn’t do anything new, but it does it well.

←Under the Sand Orange County→