It’s fair to say the world shuddered in horror when they heard that Michael Bay’s Platinum Dunes would be producing a Teenage Mutant Ninja Turtles reboot. After already driving Transformers into the ground (in every way other than box office) peeps were worried they’d do the same with their beloved heroes in a half-shell. Well, I’m here to tell you that the fear was well-founded and that the film is indeed disappointing. 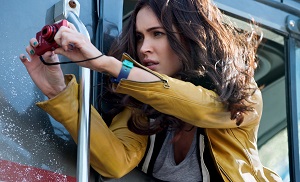 Two thousand and seven’s TMNT was also a letdown, but at least seemed to be channelling the original cartoon. It was cheesy and predictable, but seemed…I don’t know…pure at heart? Fast forward to 2014 and we have a decidedly sleazy movie that’s unpleasant to look at. Bay didn’t direct this film, but it certainly feels like one of his cinematic outings. Case in point would be the entirely inappropriate moment the film takes to leer at Megan Fox’s arse. Or the Victoria’s Secret product placement. The humour in both cases is regressively fratboy and feels out of place. We get two sleazy characters, Michelangelo and Vernon Fenwick (Will Arnett) who take turns lusting after April O’Neil and it’s only really funny in the most juvenile of ways.

Then we have the turtles themselves. The CGI is fantastic, but only in the sense that they appear to be inhabiting the same space as the real-life actors. For that, I’ve gotta give the film credit. However, they also happen to be really, really ugly. They’re slimy and warty and – let’s face it – look like actual turtles. They also look like they’ve been hitting the ‘roids. The character designs made me want to look away whenever they were onscreen. And then there’s Splinter, who is simplest the ugliest creature this side of Nicolas Roeg’s The Witches.

The whole film is oversaturated to the point of looking like a pirated DVD, and though it makes for a nice change from the desaturated look that dominated films and computer games for a while there in the mid to late 2000s, it’s a bit much. I did see the film in 2D however, so I wondered if the bright colours were an attempt to ameliorate the polarisation effect that happens when you’re watching a RealD movie.

There is one redeeming feature of Teenage Mutant Ninja Turtles, and that’s the car chase that happens two thirds of the way through the film. It’s a ten minute sequence that really made my jaw hit the floor, and was pretty much worth the price of admission. That you have to sit through such a cruddy film either side of it will be too much to ask of most people, however.

The humour is inconsistent. Some of it is quite funny – the always amusing Will Arnett feels muted here, however – but it’s delivered in such a rapid-fire manner that my brain often didn’t register it until after the moment had passed. 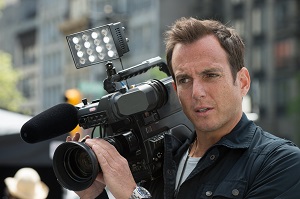 The editing isn’t as scattershot as the Transformer films, but there certainly were many times when I couldn’t quite tell what was going on.

Speaking of which, Shredder looks like a f*cking Transformer from one of Bay’s films. Seriously: his costume made up on thousands of shiny metal parts and completely lacking in character. The fact that William Fichtner’s Eric Sacks is a more interesting villain says a lot about the script. Oh, and The Foot doesn’t seem to comprise any ninjas, just dudes with machine guns.

I didn’t mind the movie so much when I was watching it, but found myself getting angrier and angrier the more I thought about it afterwards, until…well, here we are, all grumpy, thumping away at the keyboard. The thing is that the Ninja Turtles property has been many things over the years, from the original comics that were meant as a satire of 80s Frank Miller-type writing, to the kids’ cartoon designed to sell toys, and the rest of the multiple comic narratives (of which I’m not an expert.) There’s part of me that simply wants to see ‘What Goes Around…Comes Around!’ on screen, but to be fair, we kind of saw that in the 1990 film. That big screen attempt featured cool animatronics and managed to touch on elements from both the comics and the cartoon. Here, all we have is crass film that admittedly does deliver some thrills, but ultimately leaves a bad taste in the mouth.

←The Infinite Man The Maze Runner→