When your favourite film of all time is Labyrinth, then a movie with a title like The Maze Runner is bound to get your attention. The plot has echoes of ‘Lord of the Flies’ and a bunch of classic science fiction stories. It sees Thomas (Dylan O’Brien) wake up in a clearing in the centre of a giant maze together with fifty or so other kids his age. He has no idea who he is or how he got there, and soon discovers that everyone else is in the same boat. 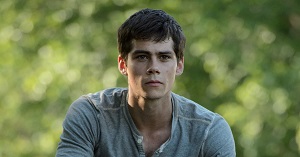 One thing I didn’t mention: the entire cast is made up of boys. And no good explanation is ever provided for this fact. This quirk in the premise doesn’t even provide for any interesting storytelling, except for the inevitable moment when a girl does appear. It’s a strange decision, and one that may be explained in the sequel novels, I suppose.

It’s clear that Hollywood chose to make this film based on the success of The Hunger Games and other vaguely similar young adult fiction, but The Maze Runner doesn’t really have much in common with that or Divergent, except for the fact that the cast comprises predominantly young good looking people.

The main problem with The Maze Runner is there’s not enough damn maze running. We don’t even go inside the maze until we’re past the halfway point, and then only briefly. The thing is, during that scene, the film really comes alive. It’s a big bowl of amazing with a side helping of awesomesauce. This is what everyone’s paid money to see surely, rather than watch a bunch of teenage boys hanging out in a forest?

See, this should be a good old school science fiction mystery, where the big revelation comes at the end, à la Soylent Green or Philip José Farmer’s ‘Riverworld’ series. The problem is, when the revelation in The Maze Runner arrives, it makes very little sense. If the sequels get made into films, then maybe explanations and/or clarification will be forthcoming, but a film should be able to stand on its own, especially when there’s no guarantee of seeing a follow-up. It feels a lot like the story was made up as the writer went along, and that they simply couldn’t come up with a conclusion as Earth-shattering as the setup deserved.

Dylan O’Brien is okay in the lead role. I found him a bit bland, but the script doesn’t require for him to emote anything other than determination. Of course, it comes as no surprise that an amnesiac would be lacking in character. 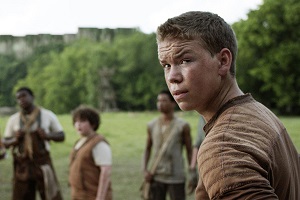 The others fare slightly better. Aml Ameen is charismatic as the instantly likable Alby, Ki Hong Lee is great as the expert runner, and Will Poulter’s always excellent. Kaya Scodelario is captivating as usual, though her character doesn’t have much to do. I think I’m biased when it comes to her work (ever since first seeing ‘Skins’), since I’m entranced by her performance even when she’s doing nothing but looking pensive.

The production values are decent, even if the otherworldly critters are only shown in brief glimpses, as if to hide their shortcomings. The visual design of the maze, however, looks fantastic, and is a great mix of practical sets and CGI. It’s just a pity we see so little of it.

Having not read the book, I have no idea if this is a good adaptation or not. The film is awkwardly paced and let down by a disappointing denouement, not to mention that THERE’S NOT ENOUGH MAZE RUNNING. Worst case of false advertising since Snakes Alive.