Coming hot on the heels of Predestination is another Australian time travel paradox movie, The Infinite Man. Billed as a time travel romantic comedy, it could best be described as Groundhog Day meets Primer. 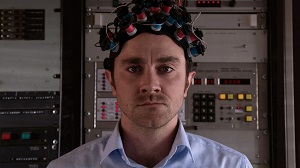 Dean (Josh McConville) wants everything to be perfect between him and his long-term girlfriend, Lana (Hannah Marshall), so much so that he’s willing to live the day over and over again in an effort to get it right. In a brilliant case of time travel loopiness, Dean and Lana find themselves in the unique (if only unique had a plural) situation of intersecting with the same moment in time over and over, with hilarious results.

I can’t heap enough praise upon the time travel element of the script. Though I don’t consider myself an expert on theoretical temporal science, the paradoxical timeline presented in The Infinite Man feels pretty much perfect. As with Predestination, each piece of the puzzle seems to fit, and it’s incredible to see just how clever the writing is in this regard.

The performances of McConville and Marshall are great too. It’s really McConville’s film – not to disparage Marshall; I’ll get to her later – but Alex Dimitriades also puts in a great comic performance as the third wheel/perpetual spanner in the works. The trio of characters work wonderfully on screen together, and the performers bounce off each other effortlessly.

Then we get to the major letdown with The Infinite Man: this really is a story about a guy trying to get the girl, no matter what. And that’s it. Lana is the object of his desire just because, which is disappointing. It doesn’t seem to matter what she wants – in fact, we’re never really given much of an insight into her character, much less a reason as to why she’s put up with the crazily controlling and highly strung Dean. She’s like the princess in another castle, and when you think about it that way the film becomes more than a little creepy.

I get that the movie isn’t meant to be taken literally – realism isn’t high on The Infinite Man’s agenda – and that it should be seen as a kind of parable. And this would be fine, if the moral was clear. But it’s not. The film veers tantalisingly close to taking a moral stand before a last second fumble that, once seen, is hard to unsee.

The technical aspects of The Infinite Man are fantastic. The sci-fi gimmick utilised brilliantly, the performances are great whilst the cinematography and editing are close to perfection. It’s just a pity that the overall narrative feels like it can’t do justice to Lana’s character. It may be Dean’s story, but it’s hard to root for him when the film doesn’t allow us to see her as a three dimensional being.

The Infinite Man is released in Australia on 18 September 2014.