The opening to this film is almost identical to that terrible Japanese Versus. In fact for a moment I thought that maybe I had already seen this film, and wasted my money. Thankfully Sword In The Moon is a different film, and more importantly is probably the best modern martial arts film that I’ve ever seen. 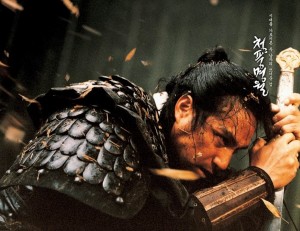 Forget fancy cinematography, bullet time or super slow motion. Forget CGI effects and bluescreen. This film is well and truly ‘old school’. The martial arts action is frantic and hurried, recalling the late great Kurosawa’s work. Most importantly, Sword In The Moon never ever gets too impressed with itself (like certain other Matrix films that I won’t name here). There are a couple of wire stunts, and maybe one moment of computer effects, but that’s it. This film was very much a case of WTFIWWG (What They Filmed Is What We Get) – a rarity these days with most action films being ‘created’ in post production.

This is a film that doesn’t need to spend any time showing off with action sequences – it is simply amazing in its own right.

Sword In The Moon is a splendid and beautiful film. The story is revealed to us slowly, and nothing is ever overstated. (In fact I was a little bit confused at times, but this is better than the standard Hollywood film overexplaining everything to us).

Sword In The Moon was everything that Crouching Tiger, Hidden Dragon should have been. This is an incredible film and I can’t wait to see it again.

Sword In The Moon