It’s got a good poster, hasn’t it? It looks exciting, yes? That’s what I thought when I first saw it on the video store shelf.

Unfortunately I was VERY disappointed.

Versus is basically two or so hours of fighting. And that’s it. 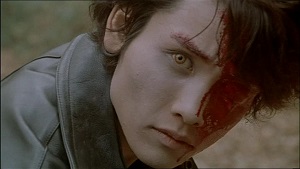 There’s practically no plot, character development or change in pace at all in Versus. The actors have produced great caricatures in a very Japanese sense, but other than that there is no character depth whatsoever. In fact it seems that they were given unique appearances and quirky mannerisms just so as we could remember which one is one, cos there’s nothing else with which to differentiate them. Their motivations are unclear, and they rarely pay any attention whatsoever to anybody but themselves.

The entire film is basically one scene, all taking place within a forest. There’s a couple of flashbacks that supposedly explain what’s going on but I was none the wiser.

Okay, so some of the fights are quite good, and at times it looks as if everyone’s done their own stunt work (which is either admirable and/or explains the lack of acting talent on display here). There are some ingenious shots and cool stunts, but this in isolation isn’t enough to make a good film.

In the end I had to fast forward the last 30 minutes or so of this film. Really it’s just fight after fight, and little more.