Tim Burton hasn’t been doing too well recently. Whilst most could have dismissed Planet Of The Apes as a bad dream, to then make Big Fish solidifies his body of work as being decidedly average of late.

I was never actually interested in seeing this film. The poster, the ad campaign, people’s recommendations: none of them convinced me that I was going to particularly like this film. When I finally did hire it: surprise, surprise! I didn’t really like it. 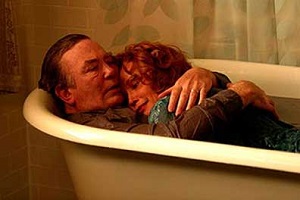 The problem with Big Fish is mediocrity. The stories that are told during the central character’s journey simply aren’t that interesting. You’ve got some great actors – Helena Bonham Carter, Danny DeVito, and Steve Buscemi, but they’re simply floundering (boom boom!) in roles that don’t really go anywhere. Ewan McGregor is just about the only actor here that seems to relish his role and make the most of it.

Even Burton’s usually brilliant cinematic style is missing here. Very rarely gothic, and occasionally resembling the suburban vision from Edward Scissorhands, the sets simply failed to amaze me in the way that his other films have.

To tell you the truth I kind of dozed off for about fifteen minutes or so. Then I woke up near the end and was almost reduced to tears. Yes, this film certainly does deliver in the last twenty minutes, it’s just that all the stuff that comes before that is quite boring. Of course I realise that the ending wouldn’t have been as effective if we hadn’t witnessed everything that occurred before, but still… that’s no excuse for a boring story.

I long ago decided that Burton peaked with Sleepy Hollow. That’s the only film of his in which I wasn’t bored at some stage. (Batman and Batman Returns were fantastic adaptations, wonderfully dark, but they were quite boring and sluggish at times.) Let’s hope that Burton can prove me wrong and deliver a fantastic film next time around.