An unstoppable action movie, The Suspect is a rather exhausting experience. 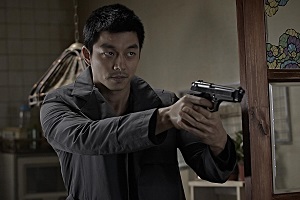 Yoo Gong plays Dong-chul, one of the best field agents trained in North Korea. When tragedy strikes, he becomes a driver for a CEO of a large corporation. When said CEO is murdered, Dong-chul happens to be in the wrong place at the wrong time. He sets out to clear his name, unravel a huge conspiracy and generally avoid getting killed.

Cards on the table: The Suspect owes a lot to The Bourne Identity. In fact, if someone walked in on you watching this and happened to glance at the screen, they’d probably think you were watching one of the Bourne films. The music is similar, the cinematography is similar, the action is similar – even the base of operations used by the police trying to track down Dong-chul looks the same. Thus, we get brutal hand to hand combat, running across rooftops and lots of vehicular carnage.

It’s competently constructed – however we do get the same over-reliance on handheld photography that used to drive Mark bonkers – but it’s all so relentless. At 137 minutes, this isn’t a brief diversion; watching The Suspect is quite the commitment. Characters appear then die too quickly for you to memorise their names, and I spent a lot of time trying to remember which double agent was which, and whose side they were on.

The fact that the film deals with North and South Korea gives it a unique flavour, and this is perhaps the most interesting aspect of The Suspect. Yoo Gong plays our hero as devoid of emotion for practically the entire film, whilst Min Se-hoon (Park Hee-soon) is only slightly more interesting as the colonel charged with tracking him down, who is beginning to have doubts about his mission. Yoo Da-in is wasted in the token female role, playing reporter Choi Kyung-hee, who mostly is along for the ride, screaming whenever the script demands.

I had zero emotional involvement with the characters here, and as I already mentioned, the running time is interminable. There’s some good action to be had, though I could have done with the camera operator taking a step or two backwards so that I could see more. The Blu-ray image is top notch, and this is overall one slick-looking film. It’s just such a pity it didn’t interest me more.

The Suspect is available now on DVD and Blu-ray from Madman.