The popularity of the Scandinavian crime genre shows no signs of slowing with The Keeper of Lost Causes, an adaptation of the first of the ‘Department Q’ novels by Jussi Adler-Olsen. 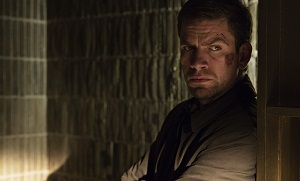 Police Inspector Carl Mørck (Nikolaj Lie Kaas) is a loose cannon, he’s out of control, he doesn’t play by the ru…okay, so The Keeper of Lost Causes isn’t treading any new ground here. Genre clichés abound, but it’s all done with minimum of fuss and a great sense of pacing. Carl, he of the loose cannons, is put in charge of Department Q, examining all the cold cases that have languished in the records department for years. Together with Assad (Fares Fares), he manages to uncover a five year old case of suicide that he feels deserves attention.

It’s all here – a divorced, nicotine-addicted detective dressed in an overcoat, an unlikely partner, snowy landscapes and a gratuitous sex scene. Kaas isn’t the most charismatic of leads. Noirish thrillers such as these require detectives who are arseholes to everyone within the film, but engender the sympathies of the audience, and Kaas doesn’t quite succeed in this department. He scowls a lot, and the script doesn’t give him a reason for being so single-minded.

Good thing that the rest of the cast is so impressive. Fares is fantastic as Assad, the more likable of the two, and the detecting is much more enjoyable when he’s present. Søren Pilmark – who will forever be Dr Hook from ‘The Kingdom’ (Riget) to me – plays the grumpy police captain, whilst Sonja Richter has the difficult yet thankless task of being the woman at the centre of the mystery.

I felt that the film let the audience get a bit too far ahead, so that we spent time waiting for our detectives to learn that which we already knew. I was often surprised how quickly we were provided with significant revelations, and would have liked the answers drip-fed to me more slowly. The film looks slick enough, whilst there clearly isn’t a huge budget to splash around. This is a vanilla DVD release, so we get no extras but the trailer.

It’s hard to shake the notion that The Keeper of Lost Causes feels like a pilot for a TV show. The sequel, The Absent One (Fasandræberne), has already been released in Europe, and I’ll be keen to see where the series goes. As long as there’s more Assad (and perhaps some female characters), then this is a crime franchise to keep an eye on.

The Keeper of Lost Causes is available now on DVD from Madman.

The Keeper of Lost Causes