Big Hero 6 is significant for a couple of reasons. It’s the first time that Disney has put into production one of the Marvel properties it now owns (as opposed to simply letting Marvel Studios do its own thing), and secondly it proves that the geek have well and truly inherited the Earth. If it isn’t the fact that superhero films dominate the box office, and comic book adaptations are making a mint on TV, there’s the fact that two years ago, Disney released the even more geeky Wreck-It Ralph. Geek has been more than a sub-culture for quite some time now. 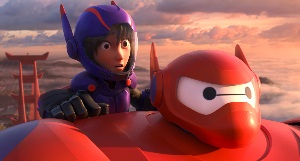 Hiro Hamada is a child prodigy who’s well on his way to being accepted into ‘that geek school’ his brother attends, where he hopes to pursue a career in robotics. When tragedy strikes, Hiro finds himself bonding with Baymax, an inflatable medical service provider robot. Together with a bunch of equally nerdy friends, Hiro must save the day, battling impossible odds and a nifty supervillain wearing a kabuki mask.

There’s a lot about Big Hero 6 that is stock-standard, and the boy-and-his-robot tale has echoes of Short Circuit and Terminator 2: Judgement Day. Clichés abound, and whilst this may be based on a Marvel comic, there’s a lot that’s been Disney-fied. And you know what? That isn’t a bad thing at all. What it does do, it does very, very well. Under the surface, this is a film about a child coming to terms with loss, and we get three incredible powerful scenes that pack a real emotional wallop.

The film is set in ‘San Franksokyo’. There’s no other explanation of the city, even though it appears to be the near future, and Japanese and North American cultures have merged. In that regard, it’s a bit like a super-shiny, clean version of Los Angeles from Blade Runner.

The animation is crisp and clean, though there’s nothing groundbreaking on show here. The character design is much the same as that of The Incredibles, and I can – unsurprisingly – see the characters of Big Hero 6 slotting easily into the next update of ‘Disney Infinity’.

The plot leaves very few surprises, and the three act structure is readily apparent to any adults watching the film. It’s not in the least bit self-aware, either. Rather than making the film feel any less clever, it means it doesn’t tread on Wreck-It Ralph‘s toes, which is a good thing.

Big Hero 6 won’t set your world on fire, but it is a good story well told. There are some big laughs, some poignant scenes and a decent – if predictable – story. It was never going to be the blockbuster success that Frozen was, but it gets the job done.

←The Suspect The Imitation Game→