It’s getting hard to remember that, once upon a time, superhero movies weren’t Hollywood’s favourite genre. They were too expensive, too hard to nail the comic book tone on the big screen. And yet here we are with the third iteration of Spider-Man in 15 years, the sixth Spider-Man film this century and the 16th Marvel movie. So forgive me if the idea of Spider-Man “coming home” to Marvel doesn’t elicit quite the response in me it does with other geeks. 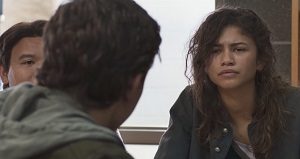 That being said, Homecoming is a good time out at the cinema. One of the first things that strikes the viewer is just how steeped this film is in the Marvel Cinematic Universe. The first 20 minutes makes it clear that Marvel and Sony are making the most of this union. You don’t have to be well-versed in MCU lore, but you certainly get a lot out of having seen the prior cinematic outings.

And of course, Tony Stark is present. A little too present, if you ask me. I was prepared for a bit of Iron Man, maybe to top and tail the film, but Robert Downey Jr. has a significant role to play in Homecoming as Peter Parker’s fatherly stand-in. The problem is that all of Peter’s school life gets pushed to the side whenever things get serious.

And Peter’s life at school is where this film comes alive. It helps that Sony have cast someone who can actually pass as a high schooler this time (Tom Holland), and surrounded him with a great bunch of child actors. Zendaya, Jacob Batalon, Laura Harrier and Tony Revolori are all excellent performers, and the ensemble really pops. It’s so good that I wish Stark wouldn’t keep getting in the way of what should have been even more of a high school movie than it actually is. The script – written by approximately 300 people, as far as I can tell from the IMDb entry – is razor-sharp, and its ability to impart a heap of information about a lot of people in record time is impressive.

Michael Keaton shows us how the Hollywood circle of life is now complete: he’s gone from Batman to Birdman to playing the Vulture in this film. He’s as strong a presence as you’d expect, hamming it up just enough to make it work without veering into pantomime, unlike previous Spider-Man villains *cough*Willem Dafoe*cough*. And the story is suitably small scale. I have been critical of Marvel’s tendency to play it safe, but at least they’ve learned how to scale down their superhero movies when required (see also Ant-Man.)

At the end of the day, however, this won’t stave off any Marvel fatigue you may be suffering. I’m well aware that a lot of my disappointment is because we’ve been spoiled with so many great superhero movies in the past decade; I can assure you that if this had appeared in 2002 I would have been much more appreciative. Homecoming is a good deal better than Guardians of the Galaxy Vol. 2, but it isn’t quite the breath of fresh air you may have been hoping for. The funny thing is, I would have liked this movie just fine without all the Marvel crossover stuff that the fans have been dreaming of for the better part of a decade. Only time will tell whether Spider-Man gets to stand by himself on his own two (eight?) feet, but in the meantime we at least have this amiable time-waster to enjoy.