A definite improvement over the last Sophia Coppola effort I saw – Marie Antoinette, way back in 2007 – The Beguiled is a confined film, both in setting and ambition. 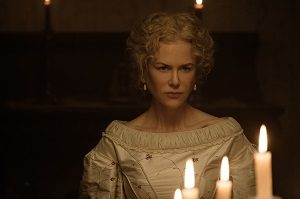 A remake of the 1971 Clint Eastwood feature, the story concerns a wounded Union soldier stumbling onto a Confederate school during the American Civil War. The school is run by Miss Martha (Nicole Kidman) with the assistance of Edwina (Kirsten Dunst, always willing to put in an appearance in a Sofia Coppola film). The presence of Corporal McBurney (Colin Farrell) sets the girls at the school into chaos, as vows are broken and alliances reconfigured. Farrell is particularly good in a tough role, sympathetic yet very flawed.

The Beguiled features an incredible cast of women, and it’s exciting to see so many onscreen at once. Joining Kidman and Dunst are Elle Fanning, Angourie Rice, Oona Lawrence, Addison Riecke and Emma Howard. All the faux Southern accents are terrible, but I was able to overlook this. Strangely enough, though I suppose unsurprising, is the fact that the film most definitely does not pass the Bechdel test, considering just about every single scene concerns the presence of McBurney in their midst. That being said, the characters are afforded depth, strength of character and agency – all good things.

The cinematography is great. Clearly, with such a tiny budget, they couldn’t move the camera much. As a consequence, DOP Philippe Le Sourd does the most he can with shadows and mist, which perfectly suits the isolated setting.

Unsurprisingly, the trailer makes The Beguiled look more sinister than it actually is. This is a subtle film – eerie, surprising, funny – even if its ambitions are less than lofty. The drama is suffused with ambiguity, but in a good way (Lost in Translation), not a bad way (The Virgin Suicides.) I’d like to state it’s the second-best Sofia Coppola film out there, but I haven’t seen Lost in Translation in a long time, and I’m concerned that it won’t have aged well. Suffice to say that The Beguiled is a nifty little tale that isn’t quite a thriller, isn’t quite a wartime drama and isn’t quite an historical romance. It’s something in between, and that hard-to-pin-down story is the kind of thing at which Coppola excels.