Whilst Michael Keaton may be getting a lot of attention due to his stellar performance in Birdman, Alejandro González Iñárritu’s new film is more of an ensemble production. The likes of Edward Norton, Emma Stone, Naomi Watts, Andrea Riseborough and Zach Galifianakis are all present and at the top of their game, and the effortless manner in which the super-long takes breeze past all the performers is a wonder to watch. 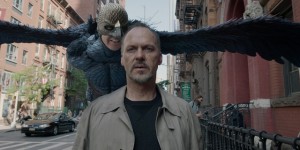 Keaton plays Riggan Thomson, an actor who was once top of the box office in the Birdman films. Now past his prime – as far as Hollywood goes, anyway – he’s desperate to prove to himself and the world around him that he’s still relevant, and is directing and starring in an adaptation of Raymond Carver’s short story ‘What We Talk About When We Talk About Love.’ It’s not going well, however. He thinks his co-star is rubbish and the critics are out to savage the play before they’ve even seen it, and to make matters worse he’s trying – unsuccessfully – to reconnect with his daughter at the same time. It’s all a bit A Midwinter’s Tale or Me and Orson Welles.

If you’ve seen the trailer for Birdman, you’ve perhaps noted the more extreme moments from the film. Magic realism rears its head irregularly, though such moments had much more prominence in the trailer than in the finished product. I was fine with it, but some may be disappointed.

Watching Keaton go nuts is always fun, and Birdman made me realise how sorely missed he’s been. For the last decade and a half, he’s popped up here and there – and in strange places too, like The Other Guys or Toy Story 3 – but he hasn’t been front and centre for quite some time. I have no idea if he’s experienced any of the simmering resentment that Riggan feels in his position, but it’s hard to shake the JCVD vibe here. It certainly feels like a truthful performance. Then again, he could simply be doing his job: convincing us that it’s real.

As good as Birdman is, I can’t really imagine myself rushing out to watch it again. Whilst all the characters had depth, there were no real emotional peaks and valleys to enjoy here, just an impressed bemusement at the thespian antics on display. It’s a film brimming with many top notch performances, and the super-long Steadicam shots are certainly impressive, but at the end of the day I didn’t feel too attached to anyone on screen.