From Germany comes this stunning film that will leave you breathless.

Julia Jentsch (Downfall (Der Untergang)) gives the performance of the year in her portrayal of real life Scholl who, together with her brother, defied Nazi rule and circulated pamphlets around the university in Munich. The film starts from this moment and then spends the next six days with her as she is arrested and undergoes intense interrogation. Jentsch is nothing short of astounding as the young woman who dared to do what no one else would – even in the face of execution. 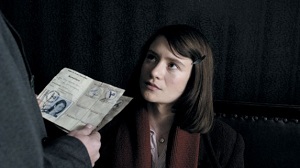 There are no melodramatic outbursts in this powerhouse of a film, instead a brilliant clash of minds as Nazi officer Robert Mohr interrogates Scholl relentlessly. Their scenes take up the majority of the film: two people in a room, talking… Yet the performances are so stunning – subtle yet compelling – that there is no need for flashbacks or cutaways. Each intake of breath, each raised eyebrow, each tear threatening to fall has momentous significance in The Final Days. Flawlessly directed, the film goes to show just how unimportant dizzying visuals or sudden changes in pace are when you’ve got a tight script, great performers and (presumably) a lot of rehearsal time.

The sound design is superbly constructed, from the long silences and the exaggerated sound effects within the interrogation office to the dramatic score from Klimek and Heil (The Cave). Only on a couple of moments does the music overstep its bounds, but I was so overwhelmed by everything else that it mattered little.

The Final Days is the kind of film that makes you question who you are. However engrossed it kept me, I couldn’t help but wonder – what would I do in her situation? Would I be as strong? Would I have even taken a stand in the first place? This is an extraordinary tale of people following their conscience, no matter what the personal cost.

There have been a couple of films in the past that have dealt with Scholl and The White Rose, the name of the ‘secret organisation’ to which she belonged, but this is the first I’d even heard her name. So often films set in World War II focus on the effects of the Nazi regime on either other countries or people, but I can’t remember ever witnessing the predicament of those Germans whose lives weren’t in immediate danger but all the same felt the need to fight back.

This is an incredible film – equal parts a tragedy and triumph – that grabs you from the first frame and doesn’t let go.