Watching Hard Candy is kinda like getting hit in the head with a pillowcase full of bricks.

There’s really no other way to describe it. David Slade’s film is likely to spark debate and certainly generate enough word-of-mouth to ensure that it becomes one of those films everyone KNOWS about yet less have actually seen. To prevent someone from wrecking the film for you I’d suggest that you go out and see it early, and try and avoid any press on the way. All you need to know is that from the moment 14 year old Hayley and 32 year old Jeff arrange a blind date after meeting on the internet, nothing will ever be the same. 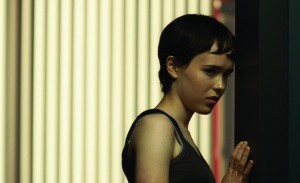 The film features five performers, but the only two that really count are Patrick Wilson and Ellen Page, and boy do they make up for the lack in numbers. Wilson gives a fantastic performance as the mysterious and conflicted Jeff, but the script truly enables 17 year old Page (X-Men: The Last Stand) to steal the show. Her performance is breathtaking and at the same time credible in this extraordinary situation.

The cinematography is flawless. From the very beginning the camera is right up against the characters’ faces, and it doesn’t let up for one moment. This film is about these two people and these two alone. The shallow depth of field, the lighting, and bare walls are all utilised to chain us to Hayley and Jeff, so that there is no escape. The sound design is captivating also.

Despite the fact that the film has an R classification in Australia, we see very little to shock us, it’s all inferred. Like Se7en, whereby many people swear they saw what was in the box (even though it was never shown), Hard Candy corners the audience, drilling some of the darkest and most despicable notions into our head, so that you feel like you have witnessed horrible things. The words of the film take precedence over the action, but what these people have to say is more powerful than anything we could have seen.

During the screening the people near me started talking, much to my chagrin, but it wasn’t because they were uninterested, it was because they were so uncomfortable they had to bring themselves back into reality. They didn’t want to be left alone in the dark with this film… and who in their right mind would? Well, me, to be truthful. This film will have a profound effect on you, and I for one think it’s brilliant. It questions our expectations but also confronts that which we take for granted, and explores areas we’d quite frankly rather leave uncovered.

Shocking, brilliant and immaculately constructed, Hard Candy is one for those who want to be challenged and provoked when they go into the cinema.