My Super Ex-Girlfriend attempts to parody the popular form of superhero movies, by turning the focus on what might happen if the hero chose to use their powers for the banal rather than the profound. With only the slightest of set-ups, it manages to draw the occasional laugh, but fails to be anything more than yet another Summer popcorn flick of the type it is aping. 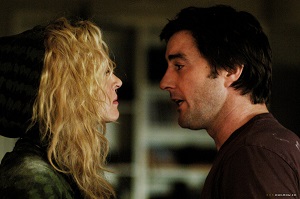 Luke Wilson must be one of the unluckiest men in Hollywood – after Charlie’s Angels, Legally Blonde and The Royal Tenenbaums, it seemed he could be anything, and yet somehow his career has staggered where his brother Owen’s has continued to rise. He is perfectly cast here, however, as the no-flash leading man against Uma Thurman’s look-at-me leading lady, and perhaps finally this time he might break through. His Matt Saunders is the straight man for much of the humour, and he is played with the charm and appeal one might expect from someone of Wilson’s under-rated skill.

Beyond Wilson, there is only the occasional moment of well-realised male bonding between Saunders and buddy Vaughn (Rainn Wilson) to lighten a plot that is so insubstantial it struggles to stand up in the long periods between laughs. The lack of plot intricacy may have worked if the writers had thought of some more amusing stunts for their cast to pull, but the highlights are few and far between – what happens to Saunders’ car is funny enough, and the Great White Scene, although likely failing to meet most viewers’ standards for acceptable CG imagery, does add a thrill.

Uma Thurman is relatively inaccessible as the titular ex-girlfriend – her madness is such that one can never really relate to her problems in the way the better of the ‘real’ super-hero films manages (Batman Begins and Spider-Man 2 the best recent examples). She does manage to be both sexy and decisive as G-Girl, and demure and uncertain as Jenny Johnson, but neither role is especially interesting. Unfortunately, Anna Faris is forced to play adorable in yet another film, and although she pulls it off without difficulty, she may soon tire of such fare. It is only in their shared scenes that either really seems to try.

Moving slowly for what is only a 100 minute film, My Super Ex-Girlfriend feels like it needed at least one more good idea to really be anything substantial. After a fairly slow start, things only get truly interesting once Faris gets properly involved, although the super-villain extraordinaire Professor Bedlam (Eddie Izzard) does lift proceedings from outright dull to mildly entertaining.

←Sophie Scholl: The Final Days The Book of Revelation→