I’m ashamed to admit I’ve only seen one Takeshi Miike film. That’s right, he makes an average of 2-3 films a year yet I’ve only seen one! In my defence, that film is Audition (Ôdishon), one of the most incredible horror films of all time, so I get some credit for that, right? Right? 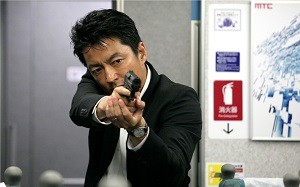 For those who don’t know, Miike specialises in…well, just about everything. If you imagined Woody Allen bouncing from genre to genre, then you’d have some idea of the man’s output. Here, Miike turns his attention to a thriller cum action movie. The premise of Shield of Straw is simple yet brilliant: Kunihide Kyomaru (Tatsuya Fujiwara) has just killed a seven year old girl who happens to be the daughter of an aging billionaire. Her father, Ninagawa (Tsutomu Yamazaki), publically offers 1 billion yen to the first person that kills Kyomaru. Security police lieutenant Kazuki Mekari (Takao Ohsawa) is assigned to escort Koyomaru to Tokyo, and it isn’t going to be easy.

Basically, this is Midnight Run meets 16 Blocks, but the sheer audacity of the setup is what makes the film so interesting. Within the first 19 minutes, four people have made attempts on Kyomaru’s life. And here’s the thing: the greater the number of police escorting the man, the higher the risk that one of the officers will crack and attempt to get the money themselves.

Miike directs proceedings in a no-nonsense manner. Shield of Straw is decidedly po-faced, often to its own detriment, yet there’s no denying there are some exciting scenes. The film also starts out very big, becoming more intimate and sombre as time goes by. As an action movie, this type of de-escalation is not what you might expect, and may be off-putting for some. Only once or twice do our heroes make stupid mistakes, but thankfully this didn’t ruin the overall experience.

I have to admit that the film doesn’t quite live up to its potential, even if I still heartily recommend it. The running time is the first thing that needed attention; 113 minutes is simply too long for a film of this nature. 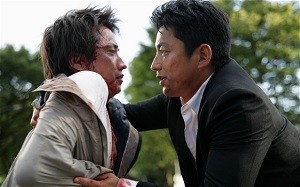 I would have preferred a speedy 90 minutes with all the excess padding excised. That it takes the time to slow down and think about the broader ramifications of the situation, however, is interesting. Like Saving Private Ryan, the script starts to question whether saving the life of this one person at the expense of others is really worth it, especially considering that the man at the centre of all this chaos is not what you’d call a Good Man.

The film called for a bigger budget, and it’s the audio that in particular suffers, with some of the worst punching sound effects I’ve heard in a long while. The bombastic score makes the film feel bigger than it is, whilst solid performances get us through some of the rockier dialogue.

The DVD release is vanilla, with only a trailer to keep the film company. The image quality is good, however. The cinematographer’s love of blue is tiresome, but it seems Miike opted for a more muted presentation than a lot of his other films, anyway.

Although I hate to admit it, this is the kind of film crying out for a Hollywood remake. Until that happens, however, if the premise excites you as much as it did for me, I recommend you get a hold of Shield of Straw.

Shield of Straw is available now on DVD from Madman.