Bruce Willis can do the hung-over world-weary cop routine with his eyes shut, but in 16 Blocks he takes it to the extreme – Jack Mosley is not only dishevelled and grimy, but sporting a noticeable pot belly to boot. The film is as far from the glamorous action movie as possible, as the mostly male cast sweat their way through two hours of peak hour New York. There’s also a severe lack of hair – almost all of the men are either balding or shaven, though its possible it has fallen out due to the stress of trying to do their own version of what’s right.

16 Blocks isn’t actually the high-concept comedy/action/blockbuster/Lethal Weapon-y kind of film I expected, in fact more of a sombre character piece. When the action does occur it’s practically over before it’s even started. Such moments are so many steps ahead of the common action scene that only someone like Richard Donner could pull it off, who’s been at it for 40 years or so. 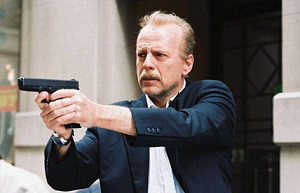 The cinematography is ultra-reminiscent of Inside Man, and even the poster looks the same. This, however, is the better of the two and never tries too hard to be clever the way that Spike Lee’s joint did. A lot of 16 Blocks is gritty and handheld (as is the current trend) and the generally strong tale of redemption is only marred towards the end by some sickly sweet (though thoroughly appreciated) sentimentality.

Mos Def (The Hitchhiker’s Guide to the Galaxy) puts in a top-notch performance as the petty crim Mosley has the onerous task of transporting to the courthouse sixteen blocks away. David Morse gets the job done but is nothing spectacular.

16 Blocks is surprising, to be sure, and is clearly a step up from the b-grade wallowing that occurred with Donner’s Timeline.