Christopher Nolan has a knack of making films that are extremely enjoyable in a popcorn-flick kind of way, and yet are also intelligent and worthy of deeper consideration. Batman Begins is close to the best comic book adaptation yet, and his caped crusader had a new depth and darkness. In The Prestige he has again succeeded, delivering both thrills and excitement as well as requiring both thoughtfulness and attention. 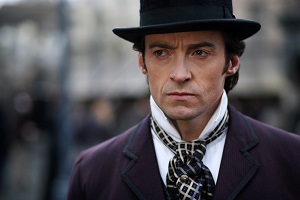 Warned up front to watch closely, and then told the basic structure of the film in the guise of explaining the architecture of stage illusion, the audience has a lot expected of them in The Prestige. The tale is told in several separate but connected timelines, with neither date-stamping nor narration to explain their relative positions in the storyline. As if that weren’t enough, the film is full of overt misdirection and subtle suggestion – an uneasy sense pervades, that things of importance are being missed, while those of irrelevance are noted. One can never be sure of ones assumptions, nor if the tidbits of information are crucial or red herring. For those who find mystery thrillers difficult to watch, Nolan may just be asking too much.

Christian Bale is wonderful again, and is fast becoming one of Hollywood’s most reliable leads. His Alfred Borden, brilliant magician but lacklustre showman, is intense and angry, and dominates his scenes. Bale is balanced by Hugh Jackman, who gives what may be his best screen performance to date as less talented but more showy Robert Angier. His eventual decline into obsessive madness is quite brilliant, and his additional turn as Gerald Root showcases his range. The remaining cast, including Michael Caine (in yet another supporting role in a busy 2006) and Scarlett Johansson, are all impressive, and David Bowie is intriguing as Nikola Tesla.

The main problem with The Prestige is that although it will mean different things to different people, and some may rejoice at the tidy way all the strands come together at the end, others will find this diminishes the mystery and intrigue. Plot threads and timelines are merged so cleanly that it feels more like showing off than is natural. Additionally, the film is firmly rooted in the late 19th century, and Nolan does a wonderful job of evoking this era – on-screen audience astonishment at what science can offer is tempered by its treatment as sideshow spectacle – and yet the outcome requires a leap of faith towards science fiction that weakens the whole basis of the story in simple illusion.

While The Prestige contains excellent performances, it always feels as though Nolan is trying to be just a little too clever, with his multiple timelines and hints and misdirections. Stripped of these extravagances, the plot is straightforward and the outcome predictable, aside from the somewhat fantastical sci-fi manner in which resolution is found. Enjoyable, but perhaps not for everyone, and certainly not for those who wish their entertainment to be a little less like hard work.

This was one of my most anticipated films of the year – Hugh Jackman and Christian Bale as rival Victorian-era stage magicians, with Scarlett Johansson caught between them and David Bowie as Nikolas Tesla! Brilliant! I was somewhat disappointed, however.

The film itself is well constructed. The shifting timelines are disorienting enough to keep you focussed without becoming too confusing, and the art direction, set design and editing are things of beauty. 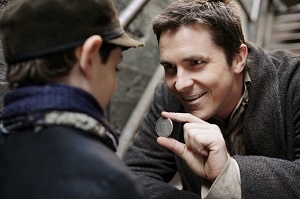 This film is gorgeous to look at, and in fact rather closely resembles Nolan’s Batman Begins, recurring actors notwithstanding. The performances are brilliant. Jackman is great as the slightly stuffy yet oh so effective stage performer Robert Angier (not to mention his ‘double’), and Christian Bale turns out another fantastic role as his rival Alfred Borden. Michael Caine has certainly played mentor before, however as soon as his voice heralded the start of the film I forgot all about his repeated roles. David Bowie’s performance is as stunning as it is surprising. I was expecting something flamboyant, but as Tesla he’s rather sullen, if completely driven at the same time. It was the last thing I expected, and as a consequence, a brilliant decision. Scarlett Johansson is rather under-utilised unfortunately. Whilst it’s good to see that she hasn’t eschewed supporting roles since becoming an almost mega-star, there simply isn’t enough for her to work with. We get no indication of her ambitions or desires, and as a consequence she seems to simply be present to help the plot move along.

The fault in The Prestige lies perhaps in the script. The dialogue is fine, however I was disappointed that the film simply didn’t surprise me. We’d been told from the start to watch closely, and anyone who does that is bound to work things out well before they’re revealed. If the Nolans had focussed more intently on the characters (it’s hard to sympathise with either Angier or Borden) we might have been distracted from the trickery, which overall fails to impress. The film simply isn’t magical enough. The concept is brilliant – that two illusionists are driven to perform the ultimate trick, no matter what the cost. Apparently the film cut out quite a bit from the source novel by Christopher Priest, and perhaps it went a little too far, watering down the material. This film is nothing but elementary if you hold it up against the Nolan’s first big hit, Memento.

As an entertaining piece of science fiction, it’s great, and a welcome addition to the rather small sub-genre of steampunk. It just could have been better.