Ever since I first saw the trailer for Crank, I’ve referred to the film as ‘Speed Heart’, and even after seeing the film that alternate title seems appropriate. Hitman Chev Chelios (Jason Statham) gets injected with a poison that will kill him if his heart rate drops below a certain point, and thus spends most of the movie running about like a madman, looking for ways to keep his heart rate accelerated while tracking down the people responsible. 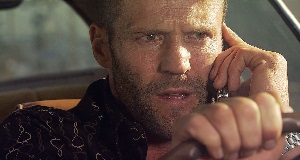 Jason Statham has been doing the same shtick for a while now, though at least Crank has an edge that was lacking from Transporter 2 and Cellular. Chelios is completely out of control, as is the film in general. There are a couple of scenes that are so offensive it’s incredible they even got made in this day and age, but after a while you realise that was precisely the filmmakers’ intent: to make the most extreme action movie possible. Crank never holds back. From the get-go the editing is what is (increasingly inaccurately) referred to as a symptom of the MTV generation – there’s jump cuts, split screens, fast forwards and slow motion, but there are also interesting elements like having the other end of a phone conversation projected on the wall behind Chelios. The production looks deliberately low budget, also. Whilst there’s an impressive array of stunts and special effects, the opening title is made from graphics you’d expect from an Atari 2600, and the film even utilises Google Earth, complete with the copyright symbol on the bottom of the screen.

The film is loud, fast and idiotic, but that’s part of the fun. None of the characters are complex or even interesting, and Amy Smart gets probably the most thankless film role yet as Chelios’ girlfriend Eve. It’s a wonder she signed on as such a pathetic and stereotypical bimbo of a character. I won’t go into it here, but suffice to say that their relationship is less than perfect. I just hope everyone watching it realises that this is, for lack of a better term, a study in excess and immorality, and that none of it deserves emulating. Dwight Yoakam pops up here too (doesn’t he always, in the most unlikely of places?) and is clearly having a lot of fun.

Crank gets full marks for refusing to tone itself down, and first time directors Mark Neveldine and Brian Taylor have obviously had a ball making it. I’m sure they have a huge career ahead of them. The film covered its budget in the opening weekend, so it’s a winner as far the studios would be concerned.

Crank probably won’t lend itself well to repeat viewings, but it’s certainly a must-see for any action aficionado who’s waiting for a film to take it to the next level.