I’m a little scared about writing this review. I’d been looking forward to Pan’s Labyrinth for the past year or so and had read the almost unanimously positive reviews, and had missed out on sold-out preview screenings, so by the time I finally got into the cinema I was psyched. After all this I’m afraid to say I was rather disappointed. 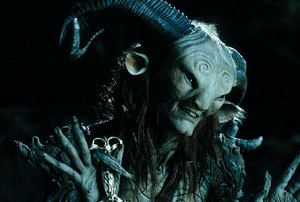 What bothers me is that my opinion of Pan’s Labyrinth on the surface simply doesn’t make sense. Labyrinth is my favourite film of all time, and in 2005 Mirrormask made it into my top ten, so this film should be right down my alley. In terms of visual creativity Pan’s Labyrinth is beautiful. Guillermo del Toro has an eye for all things entrancing and macabre, and this has to be his best-looking film to date. Whilst Blade 2 was a great sequel, it looked a little crappy at times (especially the sets towards the end of the film) and Hellboy simply didn’t do justice to the astounding visual style of Mike Mignola’s comic. This time around there are no complaints whatsoever. The sets are stunning, the cinematography gorgeous and the effects brilliant. The otherworldly creatures are fantastically lifelike, from Pan to the Pale Man (both played by Doug Jones), the latter looking like something out of a Tool video clip.

The performances are all strong, from Sergi López as the ruthless Capitán Vidal, hell bent on getting what he wants (no matter who he has to kill) to Carmen Vidal (Ariadna Gil), his pregnant wife and mother of Ofelia. Ivana Baquero is of course the star of the show and she does a fantastic job as the young Ofelia, whose experiences in the human world and the ‘other’ world are as horrifying as each other. Despite the central character being a young girl, this definitely isn’t a film for children. I’ve read that del Toro wrote Pan’s Labyrinth after turning down The Lion, the Witch and the Wardrobe, and it’s obvious that C. S. Lewis’ tale was a little too ‘nice’ for his sensibilities (apart from Aslan being a selfish prick and terrorising a couple of kids).

But somehow it isn’t enough. The fantastical narrative and the historical narrative simply don’t complement each other the way they should. The characters are frustratingly two-dimensional and on a few occasions their actions simply don’t seem driven by any personal motivations, but rather are pushed in a particular direction to merely suit the story.

This wouldn’t be so much of a problem if this was a kids’ film, but it quite certainly isn’t. A fairy tale for adults requires something with a bit more depth. P.J. Hogan’s Peter Pan had more depth than this, and that was most certainly aimed at children. After all the stunning visuals, wondrous creativity on show and my joy at seeing a more mature fantasy film amongst all the Eragons and Lemony Snickets, I simply wanted more. I wanted to leave the cinema with something to think about, I wanted the film to provoke questions, and have some real-world repercussions. Instead what do we get? Facism is bad? Um, yeah ok. Fairy tales aren’t just for kids? Okay. I found it overall lacking.

Pan’s Labyrinth unfortunately joins the ranks of those disappointing films of the last twelve months or so, namely The Prestige and Lady in the Water, none of which were as good as they should have been. Del Toro’s film is still enjoyable, but doesn’t really have anything to make it stand out other than a willingness to shock. It should have been spellbinding.

Pan's Labyrinth was also covered on Episode 56 of the Chatflix Podcast.