Of the three big budget movies released this month, The Lion, the Witch and the Wardrobe is probably the most successful effort. Where King Kong was slow to get going and ridiculously long, this film is a nice ‘short epic’ at a length of 140 minutes. Where Harry Potter and the Goblet of Fire struggled (fairly unsuccessfully) to contain all of the information from Rowling’s massive novel, this film manages to do all that C. S. Lewis described, and more. In fact the attention to detail is astounding, even down to the blue bottle sitting on the windowsill. The opening scenes are a little clumsy, and indicative of director Andrew Adamson’s lack of experience with real actors (having directed both Shrek and Shrek 2). The performers never look entirely comfortable unless there is a CGI creature in front of them, an interesting reversal of the usual trend in special effects laden films. The effects themselves aren’t perfect, and rarely look real, but when it really matters (as with Aslan) the filmmakers have delivered. The battle scenes in the last act are fantastic. They mightn’t be very realistic (there’s almost no blood), but they’re certainly thrilling.

This film doesn’t come across quite as English as it should, which is a pity considering the language of the books. We only hear one actual American accent, but it jars rather horribly even so. But I guess without American input the film mightn’t have been made, so I can’t complain.

The rather un-subtle religious allegory on show has caused a bit of a fuss, but all I can say is ‘get over it’. The truth of the matter is this: it was originally a pretty powerful story, and in The Lion, the Witch and the Wardrobe it’s powerful also (even if the thirty pieces of silver have been exchanged for Turkish delight). In actual fact, this film was a lot more powerful for me that The Passion Of The Christ was. The only real problem with Lewis’ interpretation of the Bible is that it shows a rather large lack of originality, but thankfully the Chronicles go other places.

The performances are fairly strong, and naturally you’ll find no complaint from me concerning the almighty Tilda Swinton. The kids do a fine job, in particular Lucy, played by Georgie Henley. Of course Adamson’s got the CGI characters in the bag, and there are no complaints there.

The Lion, the Witch and the Wardrobe is a great adventure film, a kind of Lord of the Rings Lite, and I’m sure its success will mean a new fantasy franchise to look forward to in coming years.

That Andrew Adamson has previously been known only for helming both the Shrek films – and sharing the direction with several others for the disappointing mess that is Shrek 2 – should give some warning to anyone expecting a revelatory experience when sitting down to The Chronicles of Narnia: The Lion, the Witch and the Wardrobe. 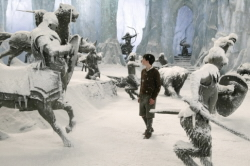 C.S. Lewis’ The Chronicles of Narnia is one of the most loved series of childrens books of all time. That he spent much of his spare time with colleague and fellow ‘Inkling’ J.R.R. Tolkien partly explains the similarities between their two masterworks. Both are epic fantasies about good and evil; both take place in fully realised ‘worlds’ of their own; both feature themes of sacrifice, honour and betrayal; and both share Christian undertones. Sadly, the brilliance with which Peter Jackson realised Tolkien’s world for the screen only serves to shade Adamson’s efforts – had Narnia been made first, we may not have recognised its deficiencies.

There is an element of unreality that strikes one immediately upon Lucy’s entrance throught the fabled wardrobe – again, Jackson’s incredible films revel in the essence of reality with which all of the other-worldly creatures and locales are imbued, giving them so much more believability than the ‘costume fantasy’ films of the past. Here, the heavy reliance on computer-generated imagery is adequate but no more… there are multiple occasions when the visual tricks are betrayed as blue screen effects, and although some of the animals are well animated, others recall an earlier talking animal, tv’s ‘Mr. Ed’.

Audiences have only recently experienced the incredible animation performance that brought King Kong to life, and alongside Kong, Aslan is a child’s finger painting writ large. Lacking expression, and certainly failing at times to continue looking like a lion – Kong never stopped seeming ape-like, even when laughing, angry, lonely or any other human emotion – Aslan is skillfully rendered in still shots only. He does look majestic, but none of the emotional depth brought to Kong is delivered here, largely I suspect as Jackson and Andy Serkis have brought to life an animal as never before. That Kong conveys more emotion than Aslan when the lion has the advantage of being able to speak is an embarassment to those responsible.

Alongside the uneven visual experience is a generally disappointing set of performances by those charged with carrying this film – its four youthful stars. By failing to give seemingly any direction to his young cast, Adamson consigns all but the wonderful Georgie Henley to a morass of over-acting, and even worse in the case of Anna Popplewell, a completely misguided wandering through a range of disconnected reactions to the events engulfing her and her siblings. Susan never quite figures out whether she should be angry, frustrated, amused or excited, and so becomes only a confused caricature. Her constant moaning and chiding is annoying; she succeeds only in being an entirely unsympathetic elder sister, never a fully realised young woman. 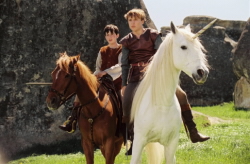 Of the adults, Tilda Swinton is passable as the White Witch, although why she has garnered so many raves for this performance isn’t immediately clear to me. She does present a certain darkness, but I never found her menacing enough to be truly fearful. James McAvoy as Mr. Tumnus shares some lovely early scenes with Lucy, and certainly this first ‘discovering Narnia’ sequence is the best of the film. The use of Liam Neeson to voice Aslan the lion is a mistake, as one never manages to forget one is watching Neeson and not Aslan. This is a constant problem for those making animated films, which this essentially is – the familiarity the audience has with the voice actor may negatively impact on their ability to believe in the animated creation. Certainly, I never was able to let go and enjoy Aslan for Aslan.

There are battles and betrayals, but none of it excited me. I wondered if the superficial nature of these skirmishes may have been better appreciated by the younger audience this seems directed at, but the session I was in was filled with bored children seemingly unmoved by the heroism of their onscreen peers or the ‘cute little talking animals’. The Chronicles of Narnia: The Lion, the Witch and the Wardrobe bears all of the hallmarks of a hit, but does not deserve the success it will surely achieve.

The Chronicles of Narnia: The Lion, the Witch and the Wardrobe