I have little interest in and/or knowledge of the British royal family, so it came as a slight surprise to find The Queen quite so engrossing. Stephen Frears has rather eclectic tastes, from the critically acclaimed Dangerous Liaisons (which bored me to tears) to the adaptation of Nick Hornby’s High Fidelity, one of my favourite all time romantic comedies. Here he shows his phenomenal talent for somehow making a film about people talking quietly spellbinding. 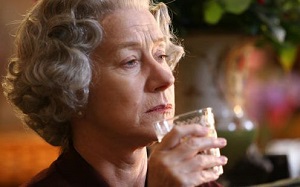 Helen Mirren is extraordinary as Queen Elizabeth II – displaying the perfect combination of aloofness, poise and wry humour, but also managing to be human and worthy of our sympathies at the same time. I have no idea if this truly reflects the real-life monarch, but the fact remains that she is a fascinating lead character. You’d think that this film would hinge on a single performance like Capote, but part of the credit should go to Michael Sheen as the newly elected Prime Minister Tony Blair, who gives us a ‘way in’ to the royals. His character is so refreshingly ‘normal’ that we can take in the more eccentric traditions on display. The dialogue between Blair and Her Majesty is wonderfully sparse, fraught with tension as the former chooses his words very carefully, and these scenes are among the best in the film. James Cromwell plays Prince Phillip and is perhaps a little too recognisably out of place. He’s usually such a strong performer but here simply isn’t convincing as the stuffy English ‘bad guy’ (for want of a better term).

Rather than a traditional life and times biopic (she is, after all, still with us), The Queen chooses to focus on a much shorter timeframe (similar to the bulk of Walk the Line) being the week after Princess Diana’s death. It’s a curious affair of manners really, as the royals’ response to the period of mourning is much different to that of the general public, and the complexity that lies in such a subtle difference of opinion is stunning.

The scenery is of course beautiful, from the palatial interiors to the private hunting grounds, and overall it’s incredible just how involving such an understated film can be, and a credit to both Peter Morgan’s writing and Frears’ direction.

The Queen’s position in society is such a fascinating phenomenon. A relic of an archaic system, after watching the film I’m still not clear on what she actually does. It seems that in ‘serving her people’ she has the rather auspicious task of being someone they look up to, someone to be in awe of, and someone to trust. But it seems they can be just as quick to turn if she makes a decision they can’t respect. Such a position of power and responsibility is brilliantly examined in The Queen.