I think this film suffered from a bad case of false advertising. I was really under the impression that it would be a wacky comedy. But what I got instead was a sentimental coming of age story. I found myself wondering if the wacky comedic moments had been injected at some later point to make the studio feel more comfortable about this drama. 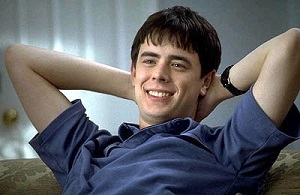 Colin Hanks has certainly inherited his father’s average looks, and it took me a while for me to like his performance. This film certainly has a very shaky beginning. Jack Black’s doing the usual Jack Black stuff, except less effectively than in his other films. In this he’s basically relegated to portraying the ‘funny stoned fat man’. (I’m not entirely sure if that’s what he was billed as, but I think it would have been fairly accurate if he had). There’s a strangely large number of cameos here, some of which work, some of which don’t (Harold Ramis is terribly miscast).

The extraordinary nature of some of the events is a bit hard to swallow in Orange County, also, but it’s still entertaining. It’s predictable, and many of the comedic situations are telegraphed to the extreme, but I chuckled a couple of times.

This film went down in my opinion when I found out that it contained Crazy Town’s song ‘Butterfly’ not once, but twice. I understand that the repetition was significant to the story, but I’ve never been able to forget the Crazy Town gig I saw at The Big Day Out in 2000, which had the worst sound production EVER.

It’s incredible the amount of publicity material that can be found on the DVD – they certainly went to town with the marketing of Orange County. I must say again, however, that much of this marketing misrepresented the film.