The Friday the 13th franchise has always been the most sadistic of all horror cycles. The Fridays are definitely the most sick and twisted of their kind, being nothing more than unadulterated sex and violence. I have only seen a few of these films, being Friday the 13th, Friday the 13th Part 2, Freddie Vs Jason, and now Jason X. With regards to horror sequels I’m only really likely to have a look at the ones that do something different. 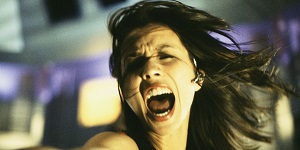 Jason X of course is quite distinct. Being set in the year 2455, I knew that this would be a slightly different outing from the earlier nine films. It’s interesting to note that whilst the start of the film begins in roughly the present day (or near future), they are careful not to disclose the date that Jason Voorhees is cryogenically frozen. This means that they will have the freedom to continue making sequels (or rather prequels to Jason X) without fear of running out of time – unless of course they’re still making them in 2455, which is highly likely.

Jason X is quite the low budget outing. There are some kinda cool (but also very shiny) CGI effects that enhance proceedings, but other than that it looks a lot like Fortress 2: Re-Entry. In fact this is the type of film in which I would have expected to see Christopher Lambert (he certainly would have made the film better). The actors look like they should be in ‘Babylon 5’, and in fact one of the sets seemed to resemble a Dark Zone Lasergames arena.

The Friday series stopped making any sense whatsoever in Part 2, so it comes as little surprise that a lot of this film is illogical and stupid. The plot is almost non-existent, and there’s little for the audience to do but wait for the creative deaths to occur. Jason X even lacks in the slasher department – there’s nothing particularly impressive or morbidly clever here, and it’s impossible to be scared in such a ridiculous setting.

Jason X could have been a refreshing take on the Friday series, but unfortunately it’s a pretty dull 90 minutes.