Tommy Lee Jones hasn’t really done anything impressive since The Fugitive, has he? Sure, he still has a commanding presence, but all his performances simply seem to be recalling that peak in his career. 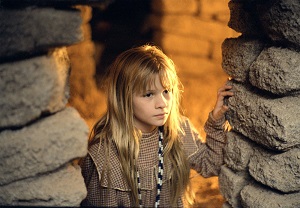 Here at least Tommy’s appearing in a good film, which is something he seems to have eschewed recently (The Hunted, Space Cowboys et al). Pairing him with Cate Blanchett works quite well, too; and of course she is fantastic as always.

The Missing had an awesome trailer. I’ve seen so many good trailers recently, (even Thunderbirds looks good), that I’m beginning to think that there should be an Oscar for best trailer. (Then you could have subcategories for Trailer Best Misrepresenting A Film and Trailer That Best Wrecked The Film. Oh, and trailer that Didn’t Use ‘Bishop’s Countdown’ From Aliens…that’d be a highly coveted and rarely achieved prize.) The film itself is something I enjoyed intensely at the time, but now that I think back I’m not quite sure what was so good about it.

Jenna Boyd gave a great performance, and it was truly incredible to see her control a horse that could have quite easily eaten her a dozen times over and still not be full. (You gotta watch out for those carnivorous horses…they’re the worst kind. I’ve seen them in Goya paintings.)

This is one of those westerns (although it’s really set a bit too recently to be considered a proper western) that has ‘bad’ Native Americans, and then introduces some ‘good’ Native Americans later on. I don’t know anything about US culture and how society’s collective conscience stands at the moment, but I always feel uneasy watching films like this. The Bad Guys are almost portrayed as ruthless savages, and I guess I always feel uneasy when a minority is portrayed negatively by the majority, even if they are realistic in their depiction. (Anyway, Australia can’t say much…the closest we get to reconciliation is Midnight Oil wearing ‘sorry’ outfits in the Sydney Olympics closing ceremony).

This film is too long, but considering Howard also made Apollo 13 (a film I saw five times for some reason), I guess I should be happy that it isn’t any longer. Like all of his films, there are good production values and a solid story, but there’s nothing extraordinary about The Missing.