Tom Hardy. In a car. On the phone. It doesn’t sound like a great setup for a film, but Locke boasts a brilliant script and a knock-out performance from Mr Hardy. 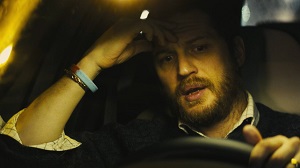 I’m always a sucker for single-location thrillers, and though Locke isn’t a thriller in a traditional sense, it very quickly establishes three concurrent narratives that need resolving, switching between them right up to the end. Hardy plays Ivan Locke, a construction manager who hops into his car on a night that will change the course of his life. He has a number of calls to make, you see, and none of them are going to be easy.

Hardy is excellent in the lead role. This is essentially a one man show, aside from voices on the phone. Locke’s phone is connected through the car’s bluetooth, so it’s easy enough for the film to establish who’s calling/being called by showing us the dashboard display. It’s the kind of film that would have been much more difficult to make a decade ago.

Of course, the film shares much in common with the brilliant Buried. The films presented similar challenges for the production team, however Locke isn’t quite as successful in this department. One of the things I liked about Buried was the fact that different scenes were shot in different ways, despite the confined setting. Locke, however, doesn’t mix things up as much. It felt like the same 12 camera setups were used over and over, and whilst the mood of the film changed from scene to scene, the cinematography and editing was rather static. Don’t get me wrong: the film looks good, it’s just doesn’t have much in the way of visual dynamics.

It’s the writing, performance and direction that stands out in Locke, however it isn’t the kind of film I’d be desperate to watch a second time. Hardy’s Locke is wonderfully flawed yet obsessed with doing what he thinks is the right thing. He’s a complex character but also difficult to truly like.

The film looks beautiful on Blu-ray. The predominant colours are yellow and blue, and this never really changes (though at least we didn’t get stuck with teal and orange, like every movie poster from the last 15 years.) There’s a short featurette included, as well as a commentary by writer/director Steven Knight.

Locke is available now on Blu-ray and DVD from Madman.