Set in Patagonia in 1960, this film tells the story of an Argentinian family who happen to meet a German doctor in their travels. The family are reopening a lodging house, and accept the doctor as their first guest, not realising that he is in fact notorious war criminal Josef Mengele, who performed horrific human experiments in the Auschwitz concentration camp. 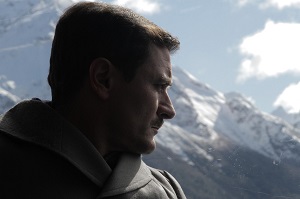 The German Doctor is more historical drama than thriller. Though the pace picks up towards the end, this is a film that drips with menace, rather than cheap thrills. To be honest, I would have preferred a more traditional thriller, although the results may have been a little gauche considering the subject matter. (Then again, Inglourious Basterds.)

There’s no doubt that this film is chilling. The storytelling is insidious, slipping under your skin quite unexpectedly. The father of the family, Enzo (Diego Peretti) is a dollmaker, which means we’re treated to images of row after row of doll limbs and eyeless heads. When this is juxtaposed with the sketches in Mengele’s notebook, detailing his research…well, you get the idea.

Young Lilith (Florencia Bado) is entranced by Mengele. A sickly girl, he’s particularly interested in her condition also. When it’s revealed that the mother, Eva, is pregnant, Mengele’s interest intensifies.

At 90 minutes, this is a film that doesn’t outstay its welcome. Those – like myself – looking for a straightforward thriller might find the film tough going, however. There’s nothing slick about the cinematography or editing either. The picture quality on the DVD is serviceable on an HDTV, but the lack of clarity can become frustrating if you’re sitting close to the screen. There are no special features save for the trailer.

The German Doctor is a thousand miles away from The Boys from Brazil, but it’s a solid feature with impressive performances. Though there’s nothing remotely graphic on screen, the subject matter will make you squirm, and this is where the film truly excels. Never before has the quiet, studious gaze of a doctor been so sinister, and never before have some pencil sketches seemed quite so horrifying. The genius of The German Doctor lies in what it chooses to not show. The darkness is always there, lurking just out of the sight of the camera lens.

The German Doctor is available now on DVD from Madman.