Many readers may know that I have a thing for confined space thrillers. Rear Window, Panic Room, Wind Chill, The Lady Vanishes, Cube – it’s all good in my book. So I’m sure it comes as no surprise to anyone that Buried is my kinda movie. It’s also possibly the most confined of all thrillers, ever. 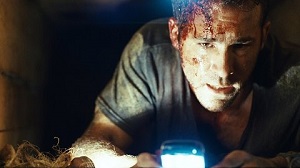 Ryan Reynolds has always been a great performer. Even in sub-par films like Waiting…, Blade: Trinity or The Proposal, it’s been clear that he is the real deal when it comes to dedicated and skilled performers. In Buried, however, he’s well and truly put through the ringer. For those who don’t know, Buried’s plot is as follows: Paul Conroy (Reynolds) wakes up to find he’s been buried alive in a coffin.

Doesn’t that just sound like the best premise ever? If not, then you’re probably a more interesting person than I. Nevertheless, that is all you need to know about Buried, as Chris Sparling’s brilliant script delivers all the information we need in dribs and drabs. You see, Paul has a mobile phone in the coffin with him, so we learn about his past and about his current predicament through the phone calls he makes. In a brilliant piece of writing, none of this feels like unrealistic exposition – quite a mean feat, considering the challenges Sparling created for himself.

Like all good confined space thrillers, Buried uses its confined setting to the fullest, deftly taking us through every narrative possibility as Paul does everything he can to get out alive. There wasn’t a dull moment in this film – it moves at a cracking pace.

As you would hope, the cinematography makes the most out of the ultra-confined setting. I realise it doesn’t sound like a the most thrilling of visual experiences, but believe me when I say Paul is shot from every conceivable angle in that tiny box. There are a number of special effects shots also, and the camera makes several impossible moves, à la Fincher’s Panic Room. Mark on at least one occasion found such impossible shots distracting, but I for one thought the variety was the only sensible manner in which to shoot such a constrained film.

Buried conveys the sense of claustrophobia perfectly. I really did feel trapped watching this film. I can’t remember a film this claustrophobic since The Descent. The music, as if to counteract the limitations of the setting, is rather extravagant in a Bernard Herrmann kind of way – the opening titles in particular paying homage to films such at Vertigo and Psycho.

Buried makes for terrifying yet compelling viewing. A truly emotional experience, this film doesn’t have a single flaw. See it.

When the first buzz for Buried started after its screening at the Sundance Film Festival, it might have surprised many that a film simply featuring Ryan Reynolds stuck in a small box could generate such hype. Rodrigo Cortéz’s film meets all expectations, however, and raises the ‘thriller in a confined space’ genre to new levels.

When Paul Conroy (Reynolds) comes to, he is injured and trapped in what appears to be a cheap wooden coffin. He has a hip flask, a cigarette lighter, and someone else’s mobile phone. 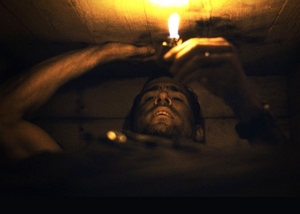 He doesn’t know how he got there or, more importantly, how he is to get out. Through a series of phone calls and text messages he will come to understand the true horror of his predicament, and that he must race against time to survive.

The absolute audacity of the writer and director to dare make a film with such limited horizons and expect it to work is breathtaking, and yet it is the limited focus that makes it succeed as well as it does. Conroy’s problems aren’t entirely confined with him in the coffin, and yet his means of dealing with them are. His exploration of his options (or lack of) is intuitive and his audience can only empathise. As Stuart mentions, the use of his various telephone conversations with both friend and foe as a way of developing both his character and the narrative is clever, and this simply underlines the risks taken in the development stage. A bloke, in a box, with a phone. Who’d have thought?

For any viewer who has wondered about the ability of this star to take a role and own it, herewith Exhibit A. Reynolds gives a wonderful performance and, although this is frequently said when discussing a film, Buried simply could not have worked without his skill. He conveys the developing horror and fluctuating hope and despair brilliantly, and it will be difficult for many viewers to simply walk out of the cinema: far more likely is that the audience will lie awake at night recalling the sense of dread they experience as Conroy battles for his life.

Another aspect that enhances the effect of the film is that the director has decided to avoid flashbacks or any other narrative device that would allow the audience respite from being within the box with Paul. Although they are quite different films, one of my main criticisms of the Australian film Beneath Hill 60 was that the frequent flashbacks to happier times diluted the impact of the tunnelling scenes in the trenches. Cortéz has made the right decision time and again in the production of Buried, and his wisdom should not be understated.

There are just moments within the film that aren’t quite perfect and prevent it from being quite as brilliant as I was willing it to be. Very, very occasionally, Cortéz employs an ever-lengthening shot of Conroy trapped within the coffin, that destroys the illusion that his audience are as trapped as his subject. This is a small criticism, but given the director was so steadfastly sticking to his plan in every other way, I couldn’t help but wonder why he employed these shots and they unfortunately proved distracting.

Nonetheless, this is a truly brave film, and one that gives hope that films can be made the way their story demands, immune to the influence of what ‘will sell’. Cortéz and Reynolds should be applauded, and here’s hoping we see more of each in coming years.