Leviathan has been nominated for a Best Foreign Language Film at this year’s Oscars, and if you found yourself thinking that maybe this crop of films has been particularly downbeat, then your opinion will only solidify further after viewing this film. 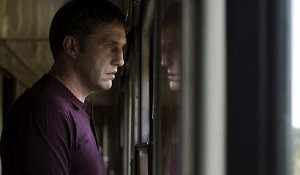 Like Primer, Leviathan does a good job of talking around the issue at hand for the first 20 minutes, so it takes quite some time to figure out what everyone’s so worried about. The film is sort of a cross between The Castle and House of Sand and Fog: at the centre of the narrative is a property dispute, and the two parties are locked in a vicious struggle over a desolate piece of real estate. Like House of Sand and Fog, proceedings become thoroughly depressing, but unlike that 2003 film, the screenplay doesn’t make any of the characters likeable. Aleksey Serebryakov plays the everyman, Kolya, as a bitter drunk who isn’t above giving his son a slap over the head if he misbehaves, whilst Roman Madyanov plays the corrupt mayor/adversary with unabashed glee. Even Kolya’s lawyer, Dmitriy (Vladimir Vdovichenkov), is terribly flawed.

It’s not that these performances aren’t good – they’re great – it’s just that the script is so damn determined to have everything go to shit. There was a moment, about three quarters of the way through, when I realised that things couldn’t get any better, and that Leviathan was a tragedy of sorts. It’s a fable, of that much I’m certain, but whether it’s about the failure of institutions, à la ‘The Wire’, or about man’s inhumanity to man, or simply an indictment of religion, I’m not sure. The one thing I am certain of is that Leviathan turns the Depression Dial up to 11 (most only go to 10, see?) The characters spend a lot of time drinking vodka by the bottle and weeping.

The cinematography is beautiful, and the landscape is stunning. The film opens with a harsh yet awe-inspiring landscape, accompanied by a piece of music that isn’t miles away from Philip Glass’ work on Powaqqatsi or Candyman. Alas, that’s all the soundtrack we get until the end credits, as the narrative doesn’t want any music to distract from its formula: bleak x despair x 1000 = movie.

Leviathan is released in Australia on 26 March 2015.