For all those of you who’ve been clamouring for more films centred on landscape gardening, your wishes have finally been granted. 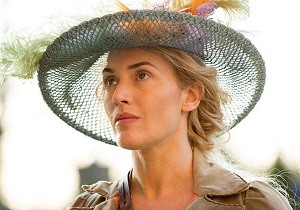 Kate Winslet plays Sabine de Barra, a woman who is given the task of designing the grand gardens at Versailles. Under the keen eye of André Le Notre (Matthias Schoenaerts), she has to work hard in a race against time to complete the gardens to the satisfaction of King Louis XIV, whilst others would love to see her fail. The film suggests Sabine is some kind of rogue gardener, and that she brings the kind of chaos referenced in the title to the very ordered gardening traditions that prevailed at the time. Except, aside from an early moment where she moves a pot plant (gasp!) we don’t really see this maverick approach applied throughout the film.

Winslet is, of course, wonderful. But she always is. The problem here is that she has to portray some sort of romantic interest in André, despite the fact that Schoenaerts plays him as the dullest man imaginable. His face is completely devoid of expression – I don’t think I even saw the man blink – and his line delivery simply slows the film down.

Winslet’s scenes with Louis XIV (Alan Rickman, who also directs) are much more entertaining, not to mention those featuring the ever-amazing Stanley Tucci. But the best scene in the entire film involves half a dozen female characters who are only present for several minutes. The problem is, this occurs at least three quarters of the way into the film, and all its good work is then undone by a gods-awful flashback sequence that is as ineffective as it is awkward.

A Little Chaos is a quaint film that doesn’t soar to any particular height. The narrative takes very few risks, and thus the film isn’t anything more than a mildly entertaining diversion. If it weren’t for the fact that the most important scenes of the film, those of grand tragedy or intense passion, are almost amateurish and otherwise lifeless, then this would have been a perfectly acceptable cinematic experience. The film will certainly entertain some, but I sincerely doubt anyone will remember much about it years down the track. See it for Winslet, Rickman and Tucci; just don’t expect too much.

A Little Chaos is released in Australia on 26 March 2015.