Another remake of a 70s horror film is enough to make the avid movie buff want to kill a whole bunch of sinning teenage campers, but The Hills Have Eyes is not your average remake. I haven’t seen Wes Craven’s original, but since it’s in ‘1001 Movie You Must See Before You Die’, I’m bound to get to it sooner or later. This time round it’s horror maestro Alexandre Aja at the helm, whose stunning debut Haute Tension left me breathless. 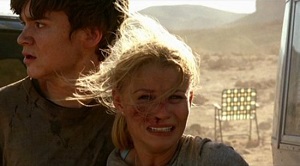 I initially couldn’t quite grasp why he’d wish his sophomore effort to be one of the score of horror remakes in recent years, but now I get it. The choice of such a ‘safe’ film would keep studios happy, and afford Aja a nice fat budget (comparatively, at least), allowing him to let loose his own brand of horror on the unsuspecting mainstream movie going public. And the result?

This is a glorious gore fest of the highest order. The Hills Have Eyes delivers beyond my wildest dreams (or nightmares) – there’s something triumphant about this hyper-violent exercise in terror that leaves any horror flick of the last few years for dead. Whilst I wouldn’t be surprised if Aja’s vision has been edited, this film certainly doesn’t hold back. The film manages to be conventional and surprising at the same time, as we are subjected to violent acts one after the other. By the end of it you feel as if you’ve endured an epic rather than a 112 minute horror flick.

The cast of characters is brilliant, and Aja takes a good amount of time setting up the situation, fleshing out the characters and establishing the pecking order amongst our heroes/victims. Simultaneously he keeps the setup engaging, without any moments of boredom one typically suffers in horror flicks, hanging out for the action to get going. Unlike the overrated Eli Roth’s efforts (Hostel, Cabin Fever), this film actually has dramatic character peaks and troughs alongside the gruesome moments, making for a complete experience.

Like Haute Tension, the images are stunning, and Aja together with cinematographer Maxine Alexandre use the stark desert backdrop to maximum effect. And somehow blood looks great amongst all that yellow.

The film has only the occasional flaw. It suffers from a smidgen of Hollywood over-exposition (do we really need a title card at the beginning of a film like this when the narrative is setup so brilliantly?), and after such a brilliant run it oversteps its bounds somewhat in the final moments, but these are insignificant in comparison to the rest of the film.

The Hills Have Eyes somehow toes the line and challenges our expectations all at the same time. The audience actually cheered – and this was a general screening, not a preview. The tension is palpable, the terror real and the retribution bloody. Not your average remake.

The Hills Have Eyes