Nowadays, it seems studios are intent on releasing misconceived sequels to recent hits, if only as a surefire technique to extract yet more of the ‘Kiddie Dollar’ from frustrated parents who must long for the days when quality children’s entertainment was produced. Fitting neatly within this trend, Ice Age 2: The Meltdown follows its moderately successful predecessor (US$383 million worldwide is small biscuits compared with the likes of Shrek, Monsters, Inc. and Finding Nemo with takings of $484 million, $525 million and $865 million worldwide respectively), and has already surpassed it after only three weeks in release.* 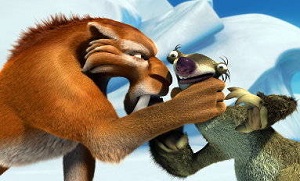 Strangely, no time at all seems to have passed for our heroes Manny (Ray Romano), Sid (John Leguizamo) and Diego (Denis Leary), and yet they’re now facing the end of the Ice Age that so threatened their existence in the first installment. This is just the first of several leaps in logic that could only pass by the most uncritical of viewers, and yet in spite of the flaws, Ice Age 2 has a certain charm that allows it be minimally enjoyable nonetheless. Unlike many adult viewers, I found the first film amusing in a generic sort of way, but this second fails to achieve any lasting impact – the disposable nature of the story and characterisations mean one forgets what it was all about immediately upon leaving the cinema.

The uncertainty of their respective motivations that allowed the generation of tension between the lead trio in the first film has been replaced in this by a saccharine ‘buddies against the world’ setup, and the film is significantly lacking for it. The introduction of two strange water-dwelling threats never reaches the same level of menace as that which came from within in Ice Age, and what is left becomes only a fairly dull ‘romantic comedy’ of sorts. Sid and Diego are reduced to supporting players alongside Manny and Ellie (Queen Latifah), with Sid actually more annoying than previously, and Diego seemingly only present to complete the returning cast. The underutilisation of Denis Leary is a real shame, as it was his performance that was best in the first part of this saga.

The voice acting is adequate, and the animation bright and colourful in the way that children below the age of about five can’t help but respond to, and yet the final result is in fact quite uninspiring. Lacking in life and vitality, and yet certain to be a box office winner, Ice Age 2: The Meltdown just isn’t worth it for anyone other than its financial backers.

←The Hills Have Eyes Rebound→