Man, the start of this film is so much like Evil Dead it’s not funny. I’d swear it was the same bunch of young dickheads and even the same cabin that was used in the original Evil Dead (minus that stupid trap door that never worked). 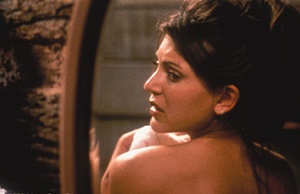 Okay, so Cabin Fever is well and truly entrenched in the low-budget gorefest horror genre, and revels in being so. I actually found that at times the film hinted at actually having the potential of surpassing the limitations of the genre. But then it was as if the writer suddenly realised that the film had to be crappy, and they then dumbed it down with some stupid jokes or immature behaviour.

The actors all have a wonderful time in this film, and occasionally it seems as if they’re all vying for the attention of the camera, each trying to upstage the other.

It’s worth mentioning that I didn’t think that the film was particularly gory, or violent for that matter. A hell of a lot of violence is inferred, happening just off screen or just before or after we join the scene. So, despite the ‘director’s warning’ at the beginning of the dvd, don’t think you’re going to be too shocked.

The concept is pedestrian, the predicaments they come across are pedestrian, but I had to admit I was scared. But I was scared of something that never happened. I kept expecting the film to go to another level. Unfortunately Cabin Fever felt like half a film to me. The setup was interesting but then the plot meandered around drunkenly, until reaching a very unsatisfying resolution. Yes, the movie can be quite hilarious, and I’m sure if I was watching this film with a bunch of inebriated people it would have been a lot more fun, but overall it is a film that never achieved its full potential.