I suppose we have Harry Potter and the Deathly Hallows to blame. As a consequence of that two part film effectively raking in twice the cash it would have as a single film, we thus witnessed Twilight: Breaking Dawn and now The Hunger Games: Mockingjay stretched across two films, with the first part of Allegiant due in 2016. How well this works, of course, depends on the source material. Whilst few argued that the two Hobbit films needed to become three, the novel ‘Mockingjay’ at least has two distinct parts to it. 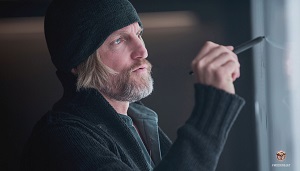 This first half takes us about as far as most expected. The moment I read the book, I knew where the most sensible intermission would be. The main problem is that, although Mockingjay doesn’t feel rushed in the way that some adaptations do, not that much happens.

Katniss is recovering in District 13 after the destruction of her home district. The resistance movement seems just as keen to recruit her talents as the Capitol was, and she realises that her days as a living symbol are far from over.

I’ve been looking forward to Mockingjay, primarily because the book was so unexpected. A triumphant, fist-pumping finale to a science fiction trilogy it ain’t, and I think some people who have only seen the first film would really be shocked if they realised just where this saga ends. The futility of the fight is beginning to become apparent here, with the media continually fanning the flames of discontent on both sides.

As an adaptation, Part 1 does the job. I don’t have an encyclopaedic knowledge of the book, but this certainly seems a strong representation of the story I read a couple of years ago. As with the films that came before, the film has the ability to show us events occurring outside of Katniss’ own experience, though perhaps less effectively than the first film.

The major problem with Mockingjay is simply this: not much happens. The majority of the runtime comprises characters hanging out in a bunker, watching television screens. This is great for the budget (and consequently, this is the first Hunger Games film without any dodgy visual effects) but it isn’t all that exciting for the viewer. For non-fans, there’s nothing here that really impresses. Those of us who enjoyed the books, of course, will be happy to return to the cinema next year, but one of these days the habit of splitting up the final film in a series is going to fail.

I should mention that Lawrence is great as Katniss once more. The late Philip Seymour Hoffman manages to do a lot even though, for the most part, he’s just sitting at a table talking, whilst Julianne Moore is a great addition to the cast as President Coin.

Mockingjay is a bit like the first Deathly Hallows film and, as a consequence, some will be disappointed. It’s the first letdown of the series, even if it doesn’t commit any grievous sins, adaptation-wise.