What’s happened to Renny Harlin? The Renny I used to know made movies like Cliffhanger, Die Hard 2, The Long Kiss Goodnight and Deep Blue Sea – in other words, kick arse (and often gleefully mindless) action movies. One of his staunchest supporters, I even love Cutthroat Island, something to which very few people can attest. 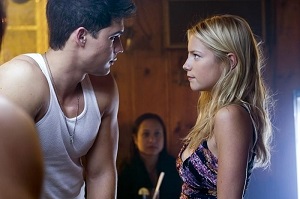 Recently, however, Renny’s been making some bad choices. I have no idea if the good scripts doing the rounds are now simply skipping him, but the fact is he’s been behind some stinkers. Mindhunters, Driven, Exorcist: The Beginning and now The Covenant. What’s going on? The annoying thing is you can see his vestigial action movie-directing muscles giving the occasional flutter. A couple of great action moments are spattered about The Covenant, and they make the experience all the more depressing.

The premise is pretty flimsy to start with – a bunch of ‘good looking’ young guys (read: underwear models) have supernatural powers reaching all the way back through their families to the times of the first white settlers. They’ve got cool powers, but they’re like, you know, bad – cos the more you use them the more you need to use them… or something. The extent of this power seems to vary – at times they can practically move mountains, and other times are simply throwing each other against walls.

Everyone involved attends a very old and expensive boarding school that’s the perfect setting for the apparently constant rain and thunder (except when the lead actress is wearing her formal dress – then it’s suspiciously dry), though thankfully homework doesn’t really take up too much of their time. This leaves many idle hours in which they can try their best to stop each other from using their powers… by using their powers. It’s all a little flimsy, and that’s before we get to a climax consisting purely of two people throwing translucent CGI globs at each other. In the rain. Continuously.

The sexist nature of the screenplay is pathetic. Sure, this is a film about GUYS – but did the female characters have to be so pathetic? The two girls spend ALL their time simply pining over the boys, whilst the latter have important ‘guy’s stuff’ to do and occasionally take time off to objectify the former – it’s patronising and really lazy writing. Even excusing the fact that all the male performers are dull, a couple of driven female roles might have given the narrative some interesting conflict.

And that’s what’s lacking in The Covenant. Conflict. Not using the power apparently isn’t an option – so their Kryptonite is a non-issue. By the time the climax rolls around (by far the dullest part of the film) there’s no doubt as to what is going to happen.

Yes it was always going to be stupid and a waste of time – but that doesn’t mean it couldn’t have been fun.

←Night at the Museum Marie Antoinette→