From the opening shot of Marie Antoinette we know this isn’t going to be your typical costume drama. The titular character reclines in a chaise-lounge whilst receiving a pedicure, absentmindedly scraping the icing off a huge cake on the table beside her. She seems to suddenly catch sight of the camera, stares directly at us for a moment before smirking knowingly and turning away. 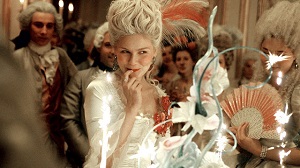 The traditional cinematic artifice is ridiculed in Coppola’s third feature, as pop songs wash over the 18th century images. The soundtrack features the likes of The Cure, New Order, Air and Aphex Twin. All the actors speak in their native accents (apart from Rose Byrne of course – we can’t have an Aussie accent in there, can we?), and at one stage we even see a pair of Converse sneakers in the midst of the garish period footwear. The sets are horridly elaborate, seeming to be deliberate exaggerations of the 18th century costumes we’re used to seeing in film. I wouldn’t be surprised if this ate up most of the ridiculously high 40 million dollar budget.

Marie Antoinette isn’t without its charms. Of course, it all depends on whether you have a problem with Dunst (as many I know do), as she pretty much has control of the film. Plucked from her native Austria to marry into the French royal family, Marie is forced to adapt to the extremely restrictive (yet at the same time highly frivolous) lifestyle of French royalty. Dunst puts on a spoilt rich girl kind of performance, similar to her turn in The Cat’s Meow, though a couple of times we do get a glimpse of how depressed Marie must be. Jason Schwartzman is perfectly cast as the shy and awkward Louis XVI (will that guy ever get to play someone suave and confident?) and the supporting cast is very strong (from Danny Huston to Judy Davis to Steve Coogan).

Sophia Coppola’s films (Virgin Suicides, Lost in Translation) have the annoying habit of coming off as unselfconsciously arty exercises that don’t stand up under much scrutiny. Both of her previous films did have their moments, but this is certainly the weakest of the three. It seems that Coppola is a brilliant director – she always elicits fantastic performances from her actors – yet her writing leaves something to be desired. The last act of Marie Antoinette is horribly awkward as we slip into a different kind of film entirely, leaving us to wonder exactly what the point of it all was.