Sharing a little in common with Jumanji (mainly African animals and Robin Williams), Night at the Museum is a disappointing romp which has little to offer outside its amusing premise. This is ideal fodder for kids these school holidays, but parents may find themselves a little bored. 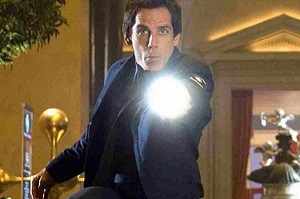 It isn’t even that the film overly relies on special effects. In fact, admirable restraint has been exercised in favour of letting actual actors play out the story. Ben Stiller fills the lead role admirably as Larry Daley, who is struggling to find work so that he won’t have to downgrade his living arrangements and move house yet again (and therefore lose custody of his son due to ‘instability’ – go figure). As Stiller finds out the true responsibilities his new job as night watchman at the Museum of Natural History, the film allows a lot of room for his trademarked subtle-to-extreme facial expressions. Larry’s relationship with his ex-wife and her husband is handled surprisingly maturely, the focus being on Larry’s powerlessness to compete with the much more successful Don (Paul Rudd) rather than on the latter’s dorkiness. Veterans Dick Van Dyke and Mickey Rooney round out the cast, along with Owen Wilson and Steve Coogan, though you have to wonder exactly how often those last two were present at the same time. Ricky Gervais also has a small comedic role, though his usual brilliant delivery doesn’t really suit the rest of the film. Finally, I spent much of the first half hour trying to figure out who the hell the Rachel Weisz lookalike was, but disregarding this, Carla Gugino does a decent job of a grossly underdeveloped role.

‘Underdeveloped’ is in fact the key word with this film, as the dull narrative never goes anywhere interesting nor does the dialogue have anything witty on offer. And that’s before any of the many inconsistencies are taken into account. I know this is a kids’ film, but I reckon even some of the youngest viewers will spot plot holes.

The ‘good’ parts are few and far between. At 108 minutes it’s overlong, especially considering we spend the opening titles familiarising ourselves with the museum’s exhibits, then have to sit through Larry’s introduction to them as well.

Night at the Museum simply doesn’t do its premise justice. It is better than The Relic, however (in case anyone was wondering…)

Night at the Museum