As one of the first big romantic comedies of the US summer silly season – Ghosts of Girlfriends Past doesn’t count as it stars Matthew McConaughey – The Proposal bears the burden of expectation built up within fans of the genre during a very serious January and February as well as the commencement of the blockbuster releases in March and April. That it isn’t entirely appalling – in spite of that seeming most likely upon viewing the trailer – is a bonus, however it is unlikely to satisfy most audiences.

When hard-ass publisher Margaret Tate (Sandra Bullock) finds out her work visa has expired and she must return to her native Canada, she prevails once more on the good will of her man-slave / personal assistant Andrew (Ryan Reynolds), and without so much as asking announces their engagement. Shocked to find the local Citizenship and Immigration Services agent doesn’t believe they’re really in love, Margaret agrees to travel to Alaska for the 90th birthday celebrations of Andrew’s grandmother (the delightful Betty White). After being taken in by Andrew’s family and welcomed with love, Margaret will be forced to question her selfish approach to life, while Andrew may just find the strength to stand up to his most feared of bosses.

As with any romantic comedy, the strength of the film lies in the protagonists – the characters must have enough appeal to allow the audience to want them to get things together before the end of the film. The mid-section dealing with the crisis that must occur in any film of this genre also must be interesting or intriguing enough to allow the characters space to grow and realise the one they need is right in front of them after all. These time-honoured and generally accepted requirements mean deciding whether a romcom makes the grade is a relatively straightforward task.

Unfortunately, both Margaret and Andrew are relatively dull, and this hampers the film’s ability to win over its audience. Bullock is lumbered with a character who is mostly unappealing and gives very little reason to believe in her when it appears she may just have a heart after all. Andrew, meanwhile, is half a man who does at least get the opportunity to grow into a fully developed adult human being by film’s end, but the rather trite paternal conflict he endures with his father Joe (Craig T. Nelson) means this merely has a sense of ‘haven’t we seen this all before?’

This is not to say that either Bullock or Reynolds turns in a poor performance, as both are adequate in roles that limit their natural appeal. Reynolds especially suffers, and the career momentum gained after his far more interesting and rewarding role in the 2008 romcom Definitely, Maybe appears to be rapidly dissipating. The supporting cast, on the other hand, provides far more spark, with White and Mary Steenburgen particularly standing out. That the film is at its most enjoyable when scenes are being stolen from its leads is a real shame. Malin Akerman is sadly underused, however, in a role that makes little sense given she has had far more to do in previous romcoms 27 Dresses and The Heartbreak Kid.

The Proposal moves quite slowly – it takes far too long to get to its crisis, and then perhaps too little time in its denouement – and is a little too flimsy to justify its 107 minutes. It does occasionally generate a smile, however, and for fans of the genre there may be just enough here to provide an entree until a more worthy addition to the romantic comedy menu arrives.

Actually, I was really, really enjoying this film for some time. Sandra Bullock and Ryan Reynolds were both in top form. Though I know many people can’t stand the sight of Bullock, I genuinely enjoyed her uptight, self-important turn as Margaret Tate. The only thing that really detracted from her performance was the work she’d had done on her face. It’s a case of ‘another one bites the dust’ with regards to actresses refusing aging gracefully. Reynolds was great even if this is a role he’s done before. It’s a pity we only got ten minutes or so of their initial relationship – 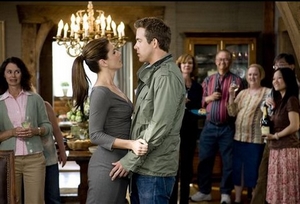 with Margaret as the domineering boss and Andrew as the subservient employee – because as soon as the proposal was agreed upon, the power play between them changed dramatically.

I agree with Mark, insofar as the supporting players performed fantastically (as is often the case in romantic comedies). Betty White had a great time (she’s been playing an elderly woman for what… 30 years now?), as did Steenburgen and Nelson. It is a pity however, that Malin Akerman got such a short time on screen, almost as if her role used to be larger.

Which brings me to the main problem with this film – the last 15 minutes or so. I was loving this movie. Adoring it, in fact. There was nothing out of the ordinary, it was completely formulaic, but it worked. And then suddenly the final act screwed it all up. The narrative didn’t take the direction I was hoping and more importantly didn’t feel right. My spidey senses were tingling; in the same way that they did with I Am Legend… did this film’s ending get changed? It certainly seems likely. If this is the ending they originally intended then the writers didn’t do their work in the lead up to that final act. It’s such a pity because the conclusion I envisaged would have worked perfectly and bucked the trend when it comes to traditional romantic comedies.

The Proposal left a bad taste in my mouth (metaphorically speaking; alas, cinema technology hasn’t advanced enough to affect a third sense yet), and it really ruined the experience. This would have been a four star film if it had followed the narrative to its natural conclusion.

←Disgrace Land of the Lost→