There’s something fascinating about a film that uses Nazis as the main characters. I’m not sure if it’s the history that’s immediately assumed once one sees the swastika, or just the artistic sense of style that the whole movement embraced, but it immediately makes me pay attention (as opposed to when they are simply the bad guys, ala Raiders Of The Lost Ark). 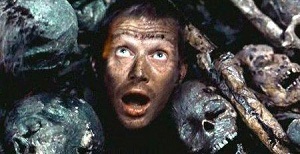 The Bunker is everything that The Keep should have been (that whacky 1983 horror film that seemed interesting at first but then soon become incomprehensible… and that was before glowing lava dude rocked up). Oops, now I’m sidetracked… Who the hell put up the money for The Keep? And why were such cool actors as Jürgen Prochnow, Ian McKellen and Gabriel Byrne in it? Really, the film is quite quite insane, and the fact that I was tired and only half-awake at the time probably didn’t help matters.

It is interesting to note that I was quite terrified during The Bunker. I think it has something to do with having no idea what shape or form the evil will take. The same fear was also generated during the first viewings of films such as The Hole and Below. When you know what kind of ‘scary thing’ the characters are up against it seems to work against the cultivation of fear (unless it’s a shark… then we’re all shit scared and don’t even go into swimming pools for months afterwards). Thus in The Bunker, where I had no idea what the explanation is going to be at the end, I was quite on edge. (In fact I turned on the light so as not to watch it in the dark. Please don’t tell anyone I did that.)

The performances are all good in this film, even considering some of the dodgy dialogue and mysterious looks delivered just past camera. Jason Flemyng I think used this as a warm up to Below, which is actually quite a similar film. I was bored at times, but I think that’s mostly to do with the fact that I have seen so many films like this (and I have only myself to blame). I loved the washed out colour of the film, and in fact I’m quite enjoying the spate of lower budget horror films that seem to be abounding currently (for instance Dog Soldiers and Cabin Fever), ‘cos really, they show that great looking films needn’t have squillion dollar budgets.

I recommend The Bunker for anyone who likes thrillers in enclosed spaces (have I mentioned that I like those movies before???), and also for anyone who was dumbfounded throughout The Keep. Really, what the hell was that film about, anyway?