And Wrong Turn is very definitely that. The fact that the sellthrough copies were available only months after the cinema release should be a good signpost, warning any potential viewers that they’re not exactly in for high-class entertainment.

As far as B-grade thrillers go, this film works. There is lots of blood, some gruesome dismemberments and a bunch of inbred mountain men giggling and snorting all the way through. 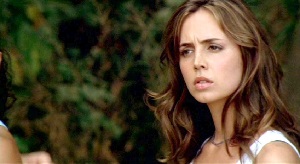 Apparently this was a big thing for Eliza (The New Guy, True Lies).
I still reckon her best work was in Buffy, but her singlet-clad busty form is the main thing adorning the cover. Reprising his recent work in B-grade thrillers is Desmond Harrington (Ghost Ship, The Hole), and he is excellent.

Okay, it doesn’t help that Mark and I were calling out the plot twists before they occurred, but it entertained all the same.

It should be noted that a particular featurette on the dvd entitled Eliza Dushku: Babe In The Woods is almost as entertaining as the film. In it Stan Winston, the director, writer, and Eliza herself praise her performance for its ‘layers’ and ‘complex character arcs’. Mark and I were silent the whole time, incredulous. Was it a joke? I mean, come on, it’s a slasher film. She runs. And screams. And occasionally fights back. Hardly anything incredible. But no, it was apparently serious.

The film is good. The featurette has to be seen to be believed.

I share Stuart’s love of B-grade film – several of my favourites in recent years have included Eliza Dushku – however, this one didn’t really do it for me. Sure, there are moments when I jumped off the couch and cried like a baby, but as I’ve stated elsewhere, frights aren’t really my thing.

The humour of such a film is where it’s going to live or die, and this one goes close. 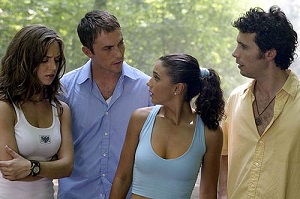 The deaths have the right comic touch, but the action is cliched enough to make an Amish woman who has never seen a film realise this has all been done before. So, while it was amusing, the question is really was it necessary to make this film, when Scream and Deliverance did it better?

There are some great moments of B-grade cinema – Dushku’s entrance is one, the death scene in the trees is another. The final scene also felt just right, and I was left with a big grin on my face. However, there is not all that much else to recommend this film, apart from Dushku who is extremely hot as always.

One final note – Stuart has mentioned the DVD featurette, and I have to concur that this is an excellent added extra. Not a word was said as we watched the director talk of his film – I can only hope he was taking the piss!