I’m at a loss to understand how effortlessly writer/directors Phil Lord and Christopher Miller managed to combine what is basically a 100 minute toy commercial into an incredibly witty, self-referential and downright poignant movie such as this. 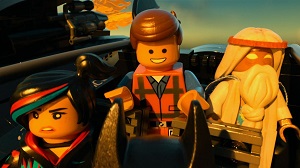 Ostensibly, The Lego Movie is about Emmet Brickowoski (Chris Pratt), an ordinary construction worker who will rise above his station to help defeat the evil President Business (Will Ferrell) from destroying the world as they know it. From the very first moment we see Lego land, we know that this is going to be an exceptionally witty toy commercial/movie.

The film expertly places itself as a cross-generational experience, aimed at children of the early 80s (1978 was the year the first minifigures were released) who are just now becoming parents of kids growing up enjoying their own Lego sets. The Lego Group has been incredibly forthright in preventing product stagnation (hence the gazillion video games released in the past decade; remember when we thought that was a ridiculous idea?) and The Lego Movie feels like the next step for them.

Part of the joy of the film is seeing all the licences that Lego holds in the one place. Thus, we get a Batman/Star Wars/Harry Potter/The Lord of the Rings/Teenage Mutant Ninja Turtles narrative mash-up. Since the film was released by Warner Brothers, we get a handful of DC heroes on screen but we don’t get to see any of the Lego properties owned by Sony, Fox or Marvel/Disney.

The animation is close to brilliant (courtesy of Australia’s Animal Logic), with most of the shots looking like animated Lego pieces, rather than the CGI sheen present in the Traveller’s Tales video games. That being said, the movie does fall short. Several of the action sequences are impossible to follow, with thousands of Lego bricks moving about the screen, not to mention an impatient editing style. Once or twice I wished that the film would simply calm down, because the frantic pacing became wearisome. I’m also sure that I missed 50 per cent of the jokes, since the dialogue was so fast paced. Gaining a new appreciation for a film after repeat viewings is one thing, but having to watch it a second time just to take in all you missed the first time around doesn’t seem right.

The Lego Movie really does go places that you wouldn’t expect, and I won’t be spoiling them here. Suffice to say that if you go in expecting your average kids’ animation, you will be wonderfully surprised.