A spin-off from The Conjuring, Annabelle focusses on the evil doll that featured in the better of James Wan’s two 2013 features. I’m not sure anyone was clamouring to discover the “untold story” of evil doll, Annabelle, but it has nevertheless arrived. Well, kind of. 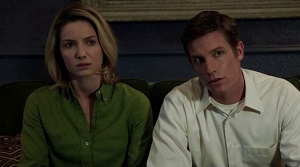 Newlyweds John (Ward Horton) and Mia (Annabelle Wallis) have just moved into a new home and are awaiting the birth of their first child. When a catastrophic (and terrifyingly-shot) tragedy happens within their home, Mia can’t shake the sense that there’s an evil loitering about the house, preying on her baby. John bought her this evil-looking doll to add to her collection, you see, and the darn thing keeps turning up in the most unexpected of places…

Annabelle doesn’t have much at all to do with The Conjuring, and in fact, most of its scares feel like they’ve come straight out of one of Wan’s other horror franchises, Insidious. Director John R. Leonetti, who was cinematographer on The Conjuring, Insidious and Insidious: Chapter 2, duplicates his work on those films with aplomb. That is, when he’s not directly referencing the likes of Rosemary’s Baby and The Omen.

There are several well-executed scares that you will appreciate if you liked those films I’ve already mentioned. The plot itself isn’t anything to write home about, though it had me stumped by the time the credits rolled. I was quite certain I’d guessed an impending twist, you see, but then it didn’t materialise. This resulted in two things: firstly that the narrative didn’t make a whole lot of sense without said twist, but also it got me wondering as to whether the screenplay underwent some last-minute changes.

This is only a feeling of mine, of course, and I might well be wrong. If hasty reshoots were ordered, however, that would explain the noticeable drop in visual quality of the film too. Annabelle starts out looking like a Hollywood production, but by the time the climax rears its head, looks more like a 90s made-for-TV movie. Of course, most films are shot digitally these days, but they don’t usually look quite so video-like as the final act of this film.

The score feels like it was lifted wholesale from Insidious – all screeching, discordant violins – and it’s just as effective/unpleasant as it was back in 2010. Annabelle is a decent enough scary movie, but doesn’t bring anything new to the screen. It feels more like the film was made to take advantage of Paranormal Activity’s non-appearance this Halloween, rather than a film that needed to be made.