Eren, Mikasa and Armin are back in part II of the stupendously popular anime series, and this collection boasts more of the same action, gore, and outlandish surprises as the first one. 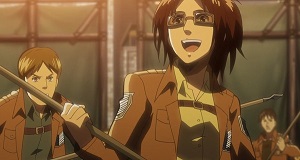 The citizens within the walls are trying to come to terms with Eren’s…ah…newfound abilities, and decide whether they are a danger or an asset to the city. Eren, for his part, has joined the Scouts, and the bulk of part II is an extended scouting mission that, without spoiling anything, goes from bad to worse.

Taking the action outside the city is a fantastic move, as it’s great to see how the soldiers have to use their omnidirectional gear differently when out in the open. The action is just as brilliant as the first half of the series, and frequently pushes the concept to the limit. There are some truly jaw-dropping moments to be witnessed here. I should be used to it by now, but Attack on Titan’s ability to blindside the viewer is amazing. There’s very little about the story that’s predictable, and I was taken off-guard regularly by this show, one that isn’t afraid to take things to the extreme.

There are some emotional moments that really ring true this time around.  Whilst the first half wasn’t exactly sterile, here there are some quite touching scenes, including one brilliant moment where the returning soldiers are treated with sustain by the general populace.

Whilst this half of the series brings with it all the brilliance of the central concept, it does carry over the same flaws. The never-ending introspection of every single one of the characters can drag. To make things worse, most of the time said introspection is unnecessary, since it’s simply telling us how the characters feel – something that’s made clear by their actions and words anyway.

I’m sure that part of this has to do with keeping the budget of the episodes manageable. Whilst the animation is among the best I’ve ever seen in an anime series, each episode is obviously at pains to balance to the static scenes with the high octane ones. I’m nit-picking, but it’s something that I was constantly aware of whilst watching.

The animation is beautiful, and once the characters get out of the city, the background art is truly stunning. It looks amazing on Blu-ray, even if the special features are a little ho-hum. Attack on Titan has such broad appeal that I can’t imagine many feeling disappointed by the show. More significantly perhaps, the final episode leaves you desperate for more. The series producers have been tight-lipped about a series 2, but let me assure you, by the time the end credits have finished, you’ll be just as keen to revisit the world of the titans as I.

Attack on Titan Collection II is available now on Blu-ray and DVD from Madman.