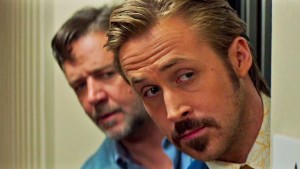 Jackson Healy (Crowe) and Holland March (Gosling) are hilarious to watch, and their pairing really does nail that buddy cop vibe that every studio was grasping for in the mid to late-80s. Angourie Rice (from These Final Hours) is the third (unofficial) member of the team, Holly, and she’s fantastic in a role that we’ve seen before, but nevertheless provides a perfect counterbalance for Jackson and Holland.

As an action comedy, this film hits a home run. The comedy is broad, and this is certainly more multiplex-friendly than Kiss Kiss Bang Bang, however, so those who hold that earlier Black film in high regard might be left feeling a bit unfulfilled.

And the thing is, at the end of the day, this film isn’t anything special. From a screenwriting standpoint, it’s excellent. No one gets structure and dialogue like Black, and the pacing is spot on. As we’ve seen with Kiss Kiss Bang Bang and Iron Man 3, he knows how to deconstruct the traditional masculine lead, and he does it here with gleeful abandon. So the guy knows how to write complex male characters.

When it comes to female characters in The Nice Guy however, Black is less successful. Put bluntly, all of the females depicted here fall into one of two camps – innocents or fallen women – and it’s disappointing to see that he can’t write a female character with more nuance. I’d like to see the fantastic shades of grey he used to paint Jackson and Holland applied to some female roles. I don’t mean to take anything away from Holly (or Rice’s brilliant performance), it’s just that we’ve seen this type of character over and over.

The Nice Guys is good fun. For anyone who’s misses a good bit of noir, this detective film will be right down their alley. Whilst Black is still an excellent screenwriter, I don’t believe he’s truly stretching himself here.

←Allegiant Hunt for the Wilderpeople→